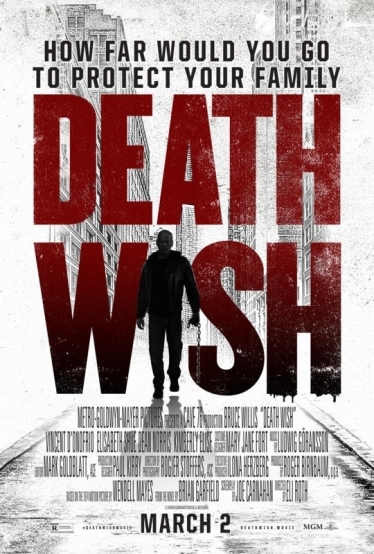 Bruce Willis takes on the iconic role originated by the legendary Charles Bronson in the long-awaited remake of the 1974 action classic.

Dr. Paul Kersey has it all. A successful career. A loving family including wife Lucy and daughter Jordan. He even has a brother, Frank, who despite his misgivings, remains loyal to Paul. However, one fateful night will change Paul’s life forever. When Paul is called into work on his birthday, Lucy and Jordan plan to make a cake for him. A group of burglars arrive and they attack both Lucy and Jordan. Lucy is killed and Jordan is put into a coma. Learning what has happened, Paul first sinks into depression.

That is, until at Lucy’s funeral, a conversation with his father-in-law opens his eyes. Paul decides to train himself to shoot a gun. He also learns the tricks of the trade via various internet clips. Decked out in a hoodie, Paul begins hunting down criminals and when he is videotaped, his face is never shown. Paul is known throughout Chicago as “The Grim Reaper” amongst the media. Where the police cannot find anything involving his family’s case, Paul gets a break and decides solely to focus on avenging his family once and for all while evading both the police and having to tell his brother of his new extracurricular activity.

When it was announced that there would be a remake to the 1974 classic action film Death Wish, some , including this reviewer, asked why and rolled their eyes. However, when it was announced that Joe Carnahan would be adapting Brian Garfield’s novel and Wendell Mayes’ original screenplay and that it would be directed by horror auteur Eli Roth, the curiosity deepened. While the original will always be hailed as a classic, this is actually not a completely bad modern reboot.

It’s safe to say that Paul Kersey will always have Charles Bronson in the fans’ minds. However, changing the character from a mild-mannered architect to a respectable doctor for the modern era does quite work. Add to the mix Bruce Willis in the role and you have yourself the latest of the aging action heroes. Willis has done action films for years and in this film, he does a great job of playing a very flawed character. Having lost it all, we see Paul sink into depression, which showcases some of Willis’ emotions but it is when he becomes “The Grim Reaper” that we will want to start rooting for him.

What’s great here about this Paul Kersey is that he may not be the greatest shooter and even proves to be a true rookie in the sense. However, his medical knowledge allows him to be a smart vigilante as he goes about some methods that, thanks to Roth’s direction, tend to be borderline Roth-esque. This is apparent in a cringe-worthy interrogation scene involving a mechanic who is revealed to be one of the thugs responsible for Paul’s eventual transformation from mild-mannered to very ticked off. Carnahan’s script allows for violence to be a tad bit more graphic that one would expect.

Vincent D’Onofrio brings quite an interesting role in Frank Kersey, who has his own problems yet remains loyal to Paul and it is when he discovers of Paul’s new “extracurricular activity” that he finds himself conflicted at first, but being the brother he is, one can only guess. Dean Norris and Kimberly Elise bring some good support as the two murder detectives who may or may not know the identity of the Grim Reaper, but knowing what he has been doing, it is as if they question their policy of the law or do they even care at this point? Elisabeth Shue makes the most of her role as the ill-fated wife of Paul and Camila Morrone’s Jordan may be spending most of the film in the hospital, but she does well as someone who just wants to stop being a victim as well.

While it is clear that it will never live up to the original, the new Death Wish is actually a well-thought out modern day reboot in which we see Bruce Willis’ take on Paul Kersey showing both a novice in terms of shooting and smarts in terms of what he can bring as a vigilante. The violence is at times, a tad more graphic, but still quite a watch about one man’s quest for revenge and justice.