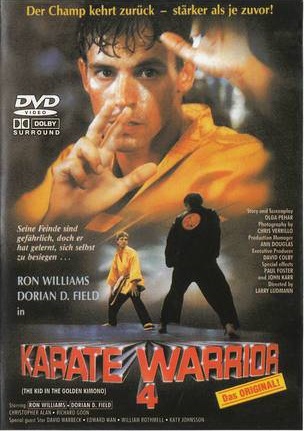 The second Karate Warrior, Larry Jones, is back and he finds a new opponent but also finds some internal conflict in this fourth installment of the Karate Kid-ripoff series.

Larry Jones has become popular with the local college crowd after defeating resident bully Joe Carson in a karate match. Larry is also in a stable relationship with Sammy. Joe, still reeling from the defeat, has hatched a plan to get back at Larry. To do so, he plans to use Larry’s sister Julie, who meets new student Bruce. Bruce is actually in cahoots with Joe. When Julie learns of Bruce’s ruse, she is visibly upset and Larry comes to her rescue.

When Larry learns Julie has left home to seek refuge with his estranged father, at first Larry is not happy. However, Larry soon accepts it and when he wins a motorcycle race against Bruce, Joe is more than mad. Larry eventually makes up with his father and Julie, but Joe hatches a plan that involves stealing from Mr. Masura’s club and nearly poisoning Larry when Bruce challenges Larry to a karate match. When Larry ends up in the hospital, will he be able to make it to the karate match on time?

There are good movies, bad movies, really bad movies, and movies that are so bad that you can’t take off your eyes off of it. This fourth installment of the Fabrizio de Angelis-directed ripoff of The Karate Kid seems to be more in the latter two if anything. It seems like de Angelis, still using the “Larry Ludman” pseudonym must have heard about Roger Corman’s Bloodfist films and perhaps attempted to ‘”compete” with the B-movie king, only let’s face it. Corman’s films are so much better.

The original Karate Warrior was the debut of young Kim Rossi Stuart and the second film, which would mark Stuart’s last in the series, was a bit of an improvement in terms of its action. Then, the inevitable happened. A new actor was cast as a new character and he’s given the clichéd teen getting bullied and as a result, learns karate from a Japanese master who in this case is Masura, who runs a restaurant. The only connection with this whole series is the “golden kimono”, which was passed on from original warrior Anthony to newcomer Larry, played by Ron Williams, who reprises his role from the original.

However, if there is one thing smart that de Angelis has done, it is that he has wisely connected the third to final installments, which makes up the Larry Jones arc of the series. The film truly has that teen B-movie feel without all the usual adult matter that made the teen movies of the 80’s what it was, but it still has that cheesy feeling, but add of course, karate to the mix. They involve the kids having fun at the beach and dealing with bullies.

Williams still remains laughable when it comes to both his training and even climactic fight, in which this time he takes on Edward Wan, who plays the character of Bruce, hired by the previous film’s big bad bully Joe, once again played by Christopher Alan. Of course, Joe results to having to act like he’s the big bad all over the place and only shows his skills in one scene where he’s bullying kids during a volleyball game. In a nod to perhaps another de Angelis-directed martial arts teen flick, Karate Rock, David Warbeck plays Larry’s estranged father, with whom he reunites with at the most crucial moment.

Karate Warrior 4 is just another expected “so bad it’s good” teen martial arts film from the mind of Fabrizio de Angelis. At least he connects this with its previous entry, but it’s still ultimately laughable.