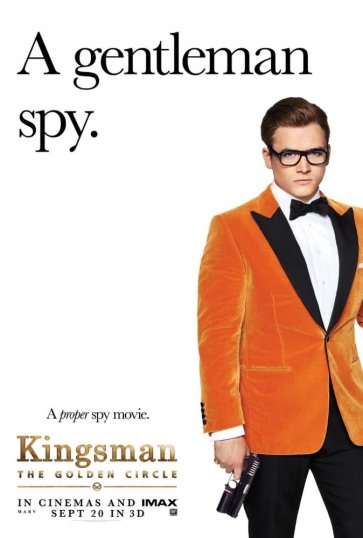 After saving the world, Eggsy and Merlin head to America to once again, you guessed it, save the world in this action-packed sequel.

Now a fully-fledged member of the Kingsman, Gary “Eggsy” Unwin has it all. A good job, a good home, and true love with Swedish princess Tilde. On his way home one night, he is ambushed by rejected Kingsman applicant Charlie, who is now equipped with a metal arm. After a big skirmish and car chase, Eggsy narrowly escapes both Charlie and the police. However, the metal arm’s remote trigger successfully hacks into the Kingsman system. The next day, while Eggsy is at dinner with Tilde and her parents, the entire Kingsman organization except for Merlin, is destroyed along with Eggsy’s home, which kills his dog JP and best friend Brandon.

Eggsy and Merlin use the “Doomsday Protocol”, which takes them on a journey to America to find the Statesman Whiskey Company in Kentucky. They meet Agents Tequila, Whiskey, and Ginger Ale. Together, they learn they must take down The Golden Circle, led by Poppy Adams. Poppy is a 50’s nostalgia obsessed drug cartel leader who has plans to make all drugs legal by tainting all forms of drugs with a potentially lethal dose of something that will cause death in a few days, yet she has the antidote. Eggsy, Merlin, and the Statesmen will need all the help they can get, including someone neither Eggsy nor Merlin would ever expect seeing again.

The 2014 hit film Kingsman: The Golden Circle helped launch the career of Welsh actor Taron Egerton to a bonafide star, allowing to kick butt with the best of them, including Colin Firth and Samuel L. Jackson. While the viewer gets a brief glimpse of Eggsy in his pre-Kingsman gear in a scene where he celebrates the birthday of one of his friends, we see Egerton fully committed in full Kingsman gear for most of the film, including an opening action sequence that is reminiscent of something you would see in a Fast and Furious film.

In quite a bold move, Julianne Moore plays the film’s villain, Poppy, which makes sense considering her being the biggest drug cartel queen in the world. However, Moore doesn’t bring a sense of actor, but rather brings the ruthlessness via her acting like a June Cleaver. Her Poppy Land just shows Poppy’s obsession with 50’s nostalgia, which meshes with advance technology. A particular scene brings a vibe reminiscent of The Texas Chainsaw Massacre or even, The Untold Story. Her sidekick, Charlie, brings back Edward Holcroft, now fitted with a robotic arm, and for him, it’s about revenge.

Mark Strong returns as Merlin and proves to be more of a big brother to Eggsy than just another agent skilled with gadgets this time around. Joining the two this time around are Channing Tatum, who makes quite an entrance as Tequila; Halle Berry as the “Merlin” of Statemen, Ginger Ale; and Pedro Pascal as Whiskey. Pascal gets the most action in, joining Eggsy and Merlin on their new mission. Whiskey’s use of the lasso and a whip makes quite an impact in his action scenes. And let’s not forget the elephant in the room, thanks to the marketing by Fox, which director Matthew Vaughn was a bit disappointed with in terms of revelations: the return of Colin Firth’s Harry.

Under the stunt coordination of former Jackie Chan Stunt Team member Brad Allan, the action in this film is just as good as the original film. From the eye popping opening car chase scene, to a great fight in a Kentucky bar to even a Mission: Impossible-style action scene set in a snowy mountain in Italy, the action of the film is impressive. In a move reminiscent of Scott Pilgrim vs. the World, we see a famous celebrity, making an extended cameo, throwing a slow-motion style flying side kick to one of Poppy’s goons, making it both hilarious and jaw-dropping. Of course, we see the heroes dish it out all to the tune of one of this celebrity’s songs in the background.

Kingsman: The Golden Circle quite frankly is just as good as its predecessor. The cast is in top form with both their antics and some exhilarating action sequences. If you liked the original, you will enjoy this one.