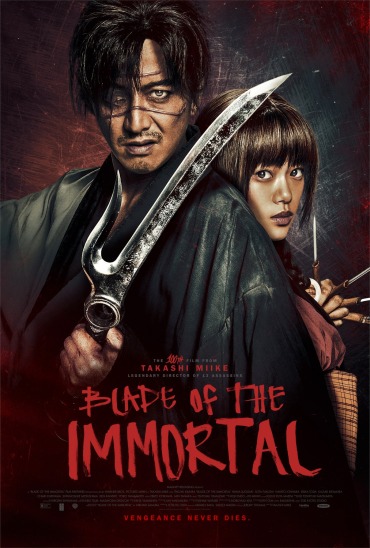 The 100th film from the prolific Takashi Miike is a well-made adaptation of a Japanese manga and anime that definitely churns out some excellent performances.

Manji is a samurai warrior who protects his sister Machi after a job has gone awry. When he is confronted by a band of bounty hunters, Machi is killed in front of Manji, who relentlessly kills all of the hunters, mortally wounding himself in the process. There, he meets a mysterious nun named Yaobikuni, who gives him the power of immortality by giving him Tibetan bloodworms, which allow Manji to heal and serve penance for his past sins.

Fifty years has passed. Asano, the master of a martial arts school is viciously killed by Anotsu Kagehisa, the leader of the Itto-Ryu School. The Itto-Ryu plans to dominate Edo under their iron blades. Asano’s daughter Rin spends the next two years training herself to seek revenge, but when she meets Yaobikuni, the nun suggests that Rin sees Manji and asks him to be her bodyguard. Learning of his immortality, she makes the offers but at first Manji refuses, until he realizes that Rin is the spitting image of Machi. Manji not only offers to help Rin in her quest for revenge, but also train her so she can not only seek revenge but become a better warrior herself.

Takashi Miike may be known for his more controversial films in the West, but he is one who can tackle any genre and execute it quite well. This adaptation of the Hiroaki Samura manga marks Miike’s 100th film and it is a heck of a great film. Despite some very minor flaws in Tetsuya Oishi’s script, and they are very minor that they are pretty much forgettable, the film’s pacing at 142 minutes runs quite smoothly, allowing character development that brings out some great performances.

Takuya Kimura, perhaps the most famous member of legendary boyband SMAP (which disbanded in 2016), may have found the role that will break his babyface image as he excellently plays lead character Manji. The role allows him to display raging emotions and even invoke a hatred for being immortal as he sees it more of a punishment rather than a blessing. Hana Sugisaka provides an innocent performance first as Manji’s sister Machi in the black-and-white filled opening then as Rin, a young girl seeking revenge but still conveys that innocence that reminds Manji of his late sister. The chemistry between the two as Manji and Rin brings a sense of “big brother, little sister” as well as “teacher and student” to the point where it becomes more the former than latter. The scenes involving Manji’s healing look painful as if it it was actually real and allows Kimura to emulate that pain of being immortal both from inside and out.

Normally in these types of films, many of the villains seem just throwaway characters and are for the most part, one-dimensional. This film breaks the archetype as some of the villains depicted in the film are able to bring emotion in their roles. Sôta Fukushi’s Anotsu Kagehisa may seem like a one-dimensional character in his quest to become the number one swordsman in Edo by killing all rivals. However, when the reasoning behind his quest is revealed, it may become a bit jaw-dropping and one can see Anotsu not so much a villain but more of a tortured soul driven by hate and a lust for power.

Erika Toda’s Makie Otonotachibana is a prostitute who is also a deadly warrior who gets to shine not only with her action skill set, but her emotional rage as it is revealed that Makie is bipolar. Once she feels she has unleashed her fury, she suddenly breaks down in grief, feeling sorry for her potential victim. Ebizô Ichikawa’s Eiku Shimizu provides quite a surprise villain as he brings out a revelation about himself that will not only shock Manji but even the audience.

The swordfight choreography by Keiji Tsujii and Masayoshi Deguchi brings a more traditional style of chanbara-play when compared to the blistering choreography of Kenji Tanigaki in the Rurouni Kenshin trilogy. However, with Miike’s flair for violence, one would expect geysers of blood and an overabundance of blood spurting. However, Miike decided to shy away from using the over the top blood-splattering and settle for a more straightforward style of having limbs chopped off and slashings. The script carefully allows Maji to have a series of one-on-one battles followed by a three-on-one and an epic climatic fight that is just quite outstanding.

Blade of the Immortal has very few minor flaws that the viewer will get past quickly and enjoy the journey of an immortal warrior on a quest to help seek revenge for a young girl. Excellent performances from the cast and Takashi Miike taking a more subtle approach to the violence rather than going overboard with the blood truly make his 100th film a definite watch!