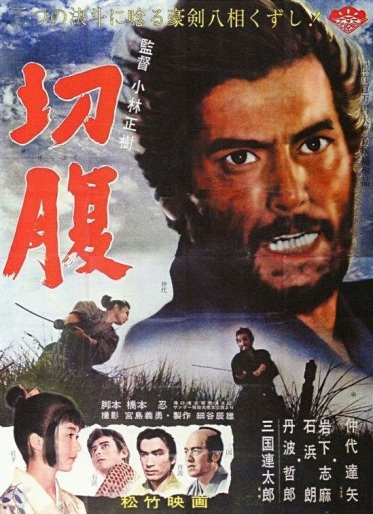 It is May 13th, 1630. At the manor of Lord Iyi, a bewildered-looking samurai appears at the manor. His name is Hanshiro Tsugumo. He has suffered since the fall of his former master, Fukushima. With no job and living in poverty, Tsugomo has only one intention in the manor of Lord Iyi. It is to sacrifice himself and die like a samurai by committing harakiri, the art of ritual suicide. While Lord Iyi himself is away, counselor Kageyu Saito decides to grant Tsugumo’s wish.

Before he decides to sacrifice himself in front of the house of Lord Iyi, Tsugumo tells a story of another Fukushima clan ronin, Motome Chijiwa. Five months prior, Chijiwa went to the manor of Lord Iyi to commit harakiri. However, Chijiwa’s plan was only a ruse for money when it is revealed that his blades were replaced with bamboo blades. Chijiwa was forced to commit the ritual using the bamboo blades he brought to the house. Tsugumo soon reveals that Chijiwa was in fact, his son-in-law and from there, Tsugumo tells the story of the incidents that lead up to this very day.

Classic Japanese cinema has had its share of auteurs, including popular dramatic filmmaker Yasujiro Ozu and the legendary Akira Kurosawa. Harakiri practically puts Masaki Kobayashi on the international map. One can see the Kurosawa-esque influence in this film, which revolves around a samurai who wishes to commit harakiri (sometimes known as seppuku) in the house of a popular lord in Edo. What is very interesting is that the film uses techniques that would later influence many martial arts films, notably the wuxia pian and classic kung fu cinema of the late 1960’s and 1970’s.

Veteran Tatsuya Nakadai churns out a terrific performance as the potentially tragic hero Hanshiro Tsugomu. From the beginning, very little is known about Tsugomu. However, as the film progresses, we learn not only more about his ways as a ronin, but he lives life as a family man. The film crosses present day well with flashbacks that begin with Tsugomu’s life as a ronin and a sworn promise to take care of his friend’s son, Motome Chijiwa, whose actions trigger this entire film. The film showcases Tsugomu as a regular family man after the fall of his clan, attempting to marry Motome to his daughter Miho, well played by Shima Iwashita to the incident that leads Motome into forced harakiri.

It is when Tsugumo reveals his true intentions, this is where the action begins. He tracks down the three men responsible for Motome’s forced harakiri and as he tracks down each one, the amount of action grows until he finds himself in a field in a nicely choreographed samurai duel between himself and Omodoka, played by veteran Tetsuro Tamba. The final act, in which Tsugumo takes on practically the entire Iyi manor, brings reminiscence of tragic heroes like wuxia pian star Jimmy Wang Yu and perhaps classic kung fu actor Alexander Fu Sheng. Despite being a black and white film, there is some graphic violence that would be perhaps be an influence to the late great Chang Cheh, who used this brand of violence in his films.

Harakiri may start out somewhat slow. However, once the plot twists are revealed, one can only be satisfied with the tragic character of Hanshiro Tsugumo, who goes from loyal samurai to regular man to an avenger of sorts. A true Japanese samurai eiga classic!