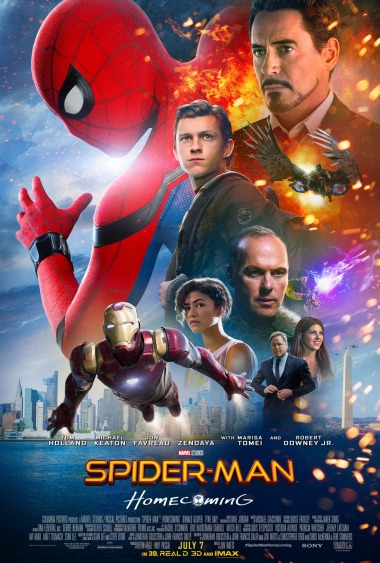 After making a wonderful impression in Captain America: Civil War, Spider-Man finally gets his solo entry in the Marvel Cinematic Universe.

It has been months since Peter Parker not only gained his powers and has become Spider-Man. After battling the likes of Captain America and his team at the Berlin Airport, Peter has decided to make an impression on Tony Stark, who feels Peter needs to stay grounded for now and just do his thing in Queens. However, leaving a double life as both a high school student at Midtown Tech and his crime-fighting days as Spider-Man is not easy, especially when his best friend Ned finds out his secret.

Peter soon learns that chaos is about to ensue when he learns that as of late, a gang of thieves have been committing crimes using a new source of alien technology. The gang is led by Adrian Toomes, who eight years ago, lost his salvage job in place of Stark’s Damage Control division. Still bitter over the loss of his job, he has stolen alien technology and has created a high-tech suit, in which he becomes known as The Vulture. Despite Tony Stark’s warning to let others handle the Vulture, Peter becomes determined to prove not only to Stark but to himself as a hero.

What originally was assumed to be another “boring” origin reboot of the wall-crawling, web-slinging friendly neighborhood Spider-Man is anything but just that. Instead of the origin film, the screenplay by the likes of Jonathan Goldstein, John Francis Daley, director Jon Watts, Christopher Ford, Chris McKenna, and Erik Sommers brings us to Peter’s world as he attempts to balance out his double life of being a teenager and being that of the superhero.

Tom Holland impressed loads of fans when he first appeared as the hero in Captain America: Civil War and once again, he proves to be the perfect Peter Parker as a fifteen-year old who tries to prove to Tony Stark that he is worthy of being an Avenger. However, the film also deals with Peter as a normal teenager with normal teenage issues, including having a high school crush on classmate Liz, played by Laura Harrier, and of course getting bullied by Flash Thompson, now played by Tony Revolori. However, Revolori’s take on Flash is more of a verbal abuser rather than the brutish Flash we saw from Joe Mangianello in the 2002 Spider-Man film and Chris Zylka in the 2012 reboot The Amazing Spider-Man.

Another major positive in the film is that we do not have to deal with another Green Goblin, because that was getting too tiring. Instead, we have the villain who was originally meant to have appear had Tobey Maguire and Sam Raimi did a Spider-Man 4 and that is The Vulture. However, there is just a small tweak to his original comic counterpart as in the film, he loses his salvaging job to Tony Stark’s Damage Control division, thus embittering him and deciding to steal the alien technology left from the wreckage of the first Avengers film and uses it to his advantage with the help of the likes of The Tinkerer, played by Michael Chernus, and two henchmen, played by Logan Marshall-Green and Bokeem Woodbine, who play two iterations of The Shocker, another classic Marvel villain.

Jacob Batalon provides great support as Peter’s best friend Ned, who upon finding out Peter’s secret is shocked at first, but then becomes as excited as perhaps Peter did with his appearance in Civil War, bringing that sense of teenage fanboy feelings that only can be seen more in reality. Marisa Tomei makes the most of her screen time as Aunt May, who also first appeared in Civil War. As the concerned aunt with a New York attitude, Tomei is near perfect for the role as a modern updated take of the classic character. Aside from Robert Downey Jr.’s mentor role in Tony Stark, occasionally donning his Iron Man armor, Jon Favreau helps amp up some of the comic relief in his recurring MCU role of Happy Hogan with Chris Evans’ Captain America only seen in school videos. However, look out for a surprise appearance in the third act as well as one of the greatest final lines in a movie!

Spider-Man: Homecoming is an extremely solid entry in the Marvel Cinematic Universe thanks to an excellent Tom Holland, who fits the role to a tee with his attempt to balance superhero and teenage life with Michael Keaton’s solid villain turn as The Vulture. Excellent support from Robert Downey Jr., Marisa Tomei, and Jacob Batalon drives the film as well. It is safe to say this is the best adaptation of the superhero on-screen.