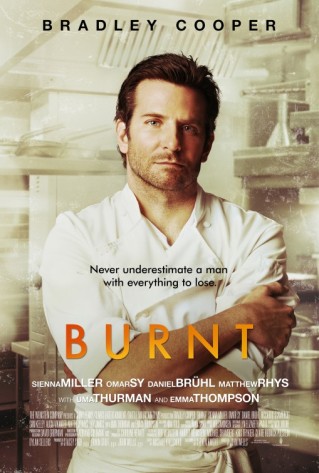 A once-talented chef struggles with his past demons during his road to redemption in this drama from director John Wells.

Adam Jones was once considered one of the top chefs in Paris as the protégé of restauranteur Jean-Luc. That is, until he started using drugs and earned a reputation for his drive to perfection. Having ruined everyone’s reputation, Adam leaves for New Orleans, where he cleans up and takes a job shucking oysters. He decides to redeem himself by going to London and start over. He ends up reuniting with Jean-Luc’s son Tony, who now operates the family hotel in London, but things at first don’t go as planned. Using all notions of sabotage, Adam reunites with old friend Michel and finds a new chef-de-partie in Helene, who at first resists Adam.

Despite Adam’s attempt at redemption, he still finds himself at odds with rival restauranteur Reece and in addition, two goons show up and expect Adam to pay a debt from his former drug dealer. When Adam gets his team, including Helene, Michel, ex-con Max, and up-and-comer David, Tony lets Adam open a new restaurant within the hotel, called Langham’s. As Adam’s reputation begins to improve, so does his relationship with Helene and Tony, the latter who can see Adam may still have that perfectionist attitude in him, but sees he has become somewhat more respectable. When Adam and Tony decide to go for a Michelin star, everything truly comes to a head. Will Adam be able to achieve his dream or will his past demons catch up to him?

There is something along the lines of meshing cinema and food that has a theme involving redemption within the chefs. It takes various methods, such as reinvention, attitude, and more for the central character to finally see the light, which allows them to unleash their culinary beauty on screen. In this film, screenwriter Steven Knight and director John Wells took a story from Michael Kalesniko involving a one-time premiere chef whose drug addictions and drive for perfection nearly destroyed him, which becomes the catalyst for his long road to redemption.

Bradley Cooper brings the central character of Adam to light as the driving force of the film. Here, we see Adam at both his best and his worst. At his best, Adam impresses the dining crowd with his food, but at his worst, he is at the level of say a Marco Pierre White, or without saying a level up from a Gordon Ramsay in terms of attitude. The two major players in terms of supporting Adam are Helene, a young sous chef who forges an on-off relationship with him, played by Sienna Miller; and Tony, the hotel manager who despite not being happy with Adam at first sees the potential of him returning to what he should have been doing. Tony is like a “big brother” to Adam and Daniel Brühl really plays the role quite well.

Omar Sy, Riccardo Scamario, and Sam Keeley make the most of their roles as Adam’s staff in the kitchen while Uma Thurman and Emma Thompson also take advantage of their cameos as a food critic and Adam’s therapist respectively. Matthew Rhys does quite well as Reece, a rival to Adam who has a revelation of sorts that at first ups the ante in their rivalry, but a shocking discovery merely brings more of a respectful attitude between these two. Alicia Vikander makes the most of her limited time as Adam’s ex Anne-Marie (who is also Tony’s sister) who may not see Adam on one level, but soon becomes close to him on a level that even he never expected.

Burnt is quite an interesting look at a chef whose climb to the top of the mountain is marred by demons, but helps lead him on a true road of redemption. Bradley Cooper truly is the driving force of the film with the supporting cast making the most of their roles, notably Sienna Miller, Daniel Brühl, and in a turn of events, both Matthew Rhys and Alicia Vikander. If you look culinary films, this is one to give a shot to.