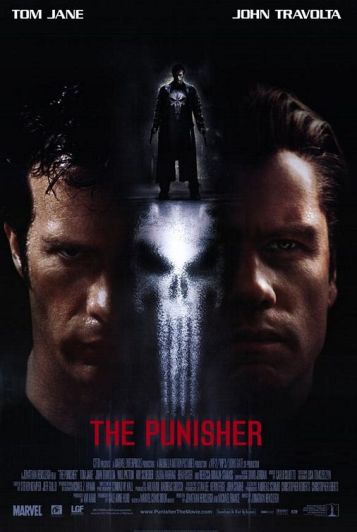 Fifteen years after Dolph Lundgren’s take on Marvel’s vigilante, Thomas Jane goes for an attempt as The Punisher, whose arch-nemesis comes in the form of John Travolta.

Frank Castle is an undercover FBI agent who is on the verge of retirement. However, he has one last mission to accomplish and that’s to stop a drug smuggling operation. The mission is a success but results in the death of Bobby Saint, the younger son of notorious crime boss Howard Saint. When Saint learns who is responsible for Bobby’s death, his wife Livia requests that his entire family be killed in retaliation. At a family reunion, Frank’s entire family is massacred with Frank left for dead only to be washed ashore and nursed back to health.

After returning home, Frank learns the police and FBI will not be able to prove Saint’s involvement in the case. Moving to an abandoned apartment, Castle turns to drinking heavily but at the same time, has retribution on his mind. Using a shirt his son gave him before he died, Frank decides to arm himself and use his sharp wits to play the deadliest cat and mouse game both he and Howard Saint ever played. Frank Castle soon finds himself having only one thing in mind for Howard Saint: punishment and thus, he becomes the Punisher.

Marvel’s The Punisher has quite an interesting story that delves into the world of Frank Castle, who becomes the titular vigilante after the death of his wife and two children after they witness a mob hit. While that notion was used in the 1989 film that starred Dolph Lundgren, which resulted in a car bombing, Jonathan Hensleigh’s take on the film takes both the catalyst and the retribution to a whole new level.

For this version, Thomas Jane takes over the role of Castle, who instead of being an ex-cop is a retired FBI agent whose last job results in the death of a mobster’s son, who only assisted to prove himself to his own father. Jane really drives the film as both a seriously tortured man, who resorts to drinking his life away, as well as seeking retribution for the massacre of his family and the term “massacre” is an understatement as it is not just his wife and son who are killed, but it is his father, his mother, and everyone at the family reunion. The use of Castle using his wits to play a deadly game against Saint is quite ingenious for this type of film.

John Travolta really hams it up in the role of Howard Saint, a notorious mob boss who uses his club as the cover for his operations while Laura Harring plays his wife, who also is responsible for ordering the execution of Castle’s family. Will Patton plays Saint’s number one man Quentin Glass as a sly type who Castle uses to his full advantage without him even knowing in a deadly game of wits. James Carpinello makes the most in two roles, the ill-fated Bobby Saint and his more hot-headed older brother John.

However, it is not all action as Frank does learn there are some good people in the world in the form of his new neighbors. They are nurse Joan, played by Rebecca Romijn, and roommates Spacker Dave and Bumpo, played respectively by Ben Foster and the late John Pinette. They seem to help Frank feel a bit grounded while he is wallowing away in both self-pity and his quest for revenge. In a nod to bring a bit of campiness with this being based on a comic book, former pro wrestler Kevin Nash plays a Saint enforcer known as The Russian, who engages in a long fight against Castle as well as Mark Collie as Harry Heck, a guitar-playing singing assassin.

The Punisher amps up the action in terms of its grittiness and even proves that the Punisher is not just about action but he has the intelligence to make his enemies turn against each other while he unleashes his brand of justice. Thomas Jane really drives the film as this iteration of Frank Castle and John Travolta looks like he is having fun hamming it up as Howard Saint.