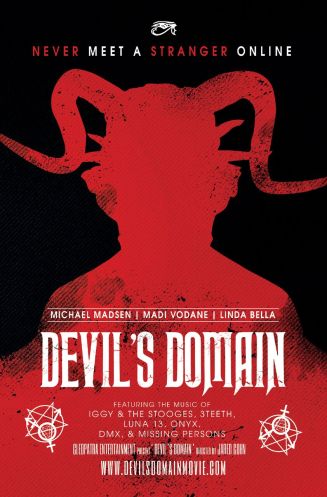 Lisa is a teenager obsessed with social media who is struggling with bulimia and the fact she is in love with now former best friend Rhonda, who had refuted her advances. She is constantly bullied both online and at school but the same group of people. When Andrew, her next-door neighbor, tries to show some sympathy towards Lisa, it turns out he sets up cameras in her room and bathroom so he can videotape her eating disorder and possibility of something worse. When the video is seen at school, Lisa is completely humiliated and her mother forces her to enter a rehab program for her eating disorder.

That night, Lisa, still reeling from the humiliation, finds a mysterious message from a woman named Destiny. Destiny is sympathetic and even invites Lisa to her house. When Lisa does go to her house, after a tryst, Destiny reveals she is actually the Devil. At first Lisa doesn’t believe her until Destiny shows her true form. Destiny makes a deal with Lisa. She will take revenge on the bullies who have destroyed Lisa’s life but there will have to be an exchange, one that could result in serious repercussions if the deal is not met. Lisa agrees to the deadly deal, but she will soon learn that revenge may not be as sweet as she thinks.

There have been plenty of teen horror films today that compared to the golden age of slasher films, tend to up the ante on the level of violence. And while there is some of that in this film, writer-director Jared Cohn takes the smart route and focuses on issues that plague teenagers today. Ranging from social media and cyberbullying to LGBTQ issues, in which not only Lisa but another supporting character is bullied at school for how he dresses, Cohn really brings these issues to light in this film, but adds a bit of devilish treats.

Madi Vodane, making her film debut in this film as the troubled Lisa, brings that girl next-door look, but it is clear that Lisa really has some issues she struggles with. She really is a tortured soul and even though her stepfather Bill, played by veteran Michael Madsen, is the only one who is clearly understanding and tries to get to her, angst gets the best of her. As for Linda Bella’s Destiny, she truly brings a pretty good performance as Destiny, or shall we say The Devil. She brings everything to the table in terms of her looks and subtle approach to helping Lisa seek revenge. Clearly being the Devil, Bella doesn’t resort to evil laughs but brings a more nonchalant “whatever” style to her character when it comes to getting even. In another smart move via Cohn, these two do have a love scene that is done tastefully without the requirement of nudity, a usually expected staple of horror films.

What’s great in this film is that Cohn resorts to using practical effects for its brutal violence. One bully gets tied up and is met with a chainsaw to both her chest and her mouth while another is given the medieval torture device and gets quartered. Of course, the violence is quite gory with the exception of two, who as a result of Lisa and Destiny’s revenge, resort to committing suicide but their deaths are not as bloody or gory like the others depicted in the film. The finale of the film, where Lisa’s part of the deal is revealed, is quite shocking and will want to make you think one thing, but turns out to be a completely different thing altogether and it is done in such a good way that it all meshes together quite well.

Devil’s Domain may be the type of film that may make you want to avoid social media for a while. Cohn’s meshing of real-life teen issues and the style of horror makes for a devilishly good time for horror film fans.

The film is currently available on VOD platforms and will be released on Blu-Ray on July 7th.