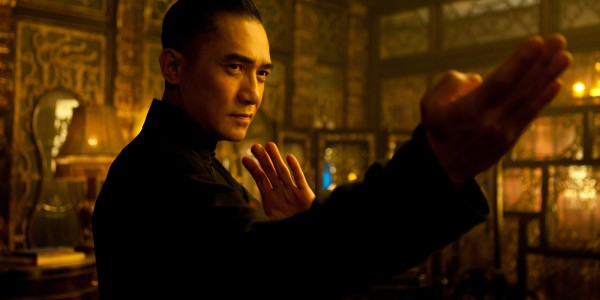 We’ve seen Wilson Yip and Herman Yau’s takes on the legend of Wing Chun grandmaster Yip Man (1893-1972). At long last, we take a look at the Yip Man film everyone has been waiting to see, directed by famous arthouse auteur Wong Kar-Wai.

The film begins with the now famous footage seen in the trailer, with Yip Man surrounded by dozens of fighters in the pouring rain. Using only his martial art of Wing Chun, Yip is able to defeat the entire crowd, which includes sanshou champion turned action star Cung Le. However, the film is not your typical action film. It becomes a set-up for a story about not only Yip Man, but his respect for all forms of martial arts.

In 1936 Foshan, Northern martial arts master Gong Yutian is seeking an heir to take over his martial arts association in the South. He has chosen to represent the North and as his successor, his top student Ma San. When Yip Man is hailed as the potential successor, he must first endure a series of tests. This includes taking on Sister San, an expert in bagua; followed by Rui, an expert in hsing-I and then Brother Yong, an expert in huen kuen. After passing these tests and showing his respects towards his opponents, he finally faces Master Gong and after their duel, which combines the physical with the mental, Yip is chosen as Gong’s southern heir.

Upset with the loss of her family honor is Master Gong’s daughter Lady Er. Despite her father hoping she will get married and have children, she feels too proud and seeks to regain her family honor. She challenges Master Yip and while she tests him and defeats him, she sees something in Master Yip that is not exactly love, but an understanding of the foundation of martial arts. She ultimately begins to show respect for him.

From here, the film delves into the fall of Foshan in October of 1938, when the Japanese takeover Yip’s family mansion. This causes Yip and his family, along with many people at the time, to live in poverty. Despite his struggles, Yip does overcome all obstacles while it is soon revealed that Ma San, in an effort to get out of the terrible life, has allied himself with the Japanese, causing friction between elder master and student.

This may seem somewhat confusing at first, but the film is not another biopic of the Wing Chun grandmaster famous for teaching the legendary Bruce Lee. The film focuses on both Yip Man and his respect for the martial arts, notably the martial arts of Lady Er. Both Tony Leung Chiu-Wai and Zhang Ziyi give out excellent performances as the respectful rivals. Yip is seen as a man of virtue while Er is a woman of pride, who will sacrifice everything to bring honor to her family and her family’s martial arts.

Wong complements the drama and the action very well in the film. It is clear that not only does he bring a more solid approach to the action scenes, unlike his last attempt at a martial arts film (Ashes of Time (1994)), but shows a piece of history that occurs, notably the fall of Foshan in 1938. While Wilson Yip did this with his Ip Man movie in 2008, Wong brings a more artistic style that empowers the people of China much like Yip’s did in a more action-flavored style.

In charge of the action in the film is the legendary Yuen Woo-Ping. The action is some of Yuen’s best work to date, showcasing a variety of martial arts styles that represent Chinese kung fu. Aside from Wing Chun, we get to see Bagua, Hsing-I, Hung Kuen, and various other forms. Leung spent much time training for the film, even breaking his arm while training, but he looks like an actual master here. Zhang Ziyi impresses in the action department using a style that looks to be Bagua combined with Hsing-I and other forms. Her best fight comes against Max Zhang at a train station, where she must bring pride to her family after an incident forces her to seek revenge.

The Grandmaster is definitely a great film from Wong Kar-Wai. It is more than about Grandmaster Yip Man, but the spirit and respect of martial arts as a whole in times of both peace and turmoil. Highly recommended but it is best to see the uncut version from Hong Kong as there is a U.S. version which trims about fifteen minutes.