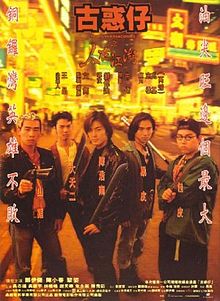 Update (5/8/2017): The film has a tentative title, Golden Brothers, and is currently being filmed in Budapest. Jackie Chan is an executive producer on the film. See the photo below:

Back in 2016, rumors of a second reboot of Young and Dangerous was announced, but it was revealed that nothing was ever heard from again. However, it looks like the original Hung Hing boys of 1996’s original tale are returning for a new film which is being touted as a sequel, but is more likely just a completely different film.

The one to officially confirm this news: Jordan Chan, who played Chicken in the original saga that ran from 1996-2000 with six installments, a prequel, and numerous spin-offs based on Cow Man’s manhua series Teddy Boy.

Chan made the announcement while attending an event in Macau with his wife, Cherrie Ying. The cast and crew are set to begin production on the film, which will revolve around heroic thieves, in Japan, Budapest, and Montenegro. Alongside Chan will be Ekin Cheng, Michael Tse, Jason Chu, and Jerry Lamb. Eric Tsang is also appearing in the film and considering Chan mentioned that the original crew are involved, does this mean Manfred Wong wrote a script and Andrew Lau is directing?

This is quite exciting news, considering the last time we saw the full cast together was in 2000’s Born to be King, where Tse and Chu would play villain characters as opposed to their trademark roles of Dai Tin-Yee and in Chu’s case Chou-Pan followed by Banana Skin. The news was announced while the original cast performed a series of concerts last year and now, it’s looking it’s finally being done.

More as this develops!