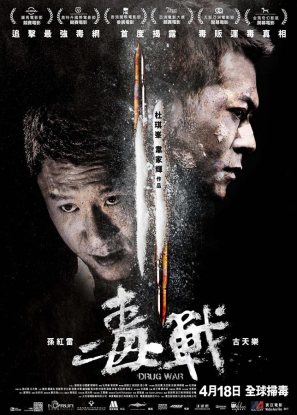 A drug runner goes to extreme lengths to save his own tail in this thrill-a-minute action thriller from director Johnnie To.

Timmy Choi is a Hong Kong drug runner who is in the midst of running from a meth lab explosion in China. The explosion has caused the death of his wife and two brothers in-law. After local captain Zhang Lei captures Timmy, he makes Timmy a deal he cannot refuse. Timmy has an ultimatum: become a police informer or be executed for his crimes. Timmy reluctantly agrees to become an informer and help broker a deal with Zhang and his team getting involved in a major deal.

Li Guan-Cheng is to meet with Ha Ha, an associate of Timmy’s to make a deal with Uncle Bill Li, one of the most wanted drug runners in the country. As Zhang poses first as Cheng to trick Ha Ha and then, as Ha Ha to trick Cheng, Cheng nearly loses his life when he is forced to snort cocaine to show his loyalty to Cheng and Uncle Bill. However, Timmy is able to help him overcome the overdose and continues to help Zhang and his team continue the deal. However, as things progress, Timmy slowly determines what the best option is and will make a decision that could change the course of everything and everyone involved.

One thing is for certain when it comes to Johnnie To and his action thrillers. To can deliver. To’s direction is driven by the script by frequent collaborators Yau Hoi-Nan and Wai Ka-Fai (with two others) that meshes police procedural drama with loads of smoothed out twists and turns that make this a worthy entry in To’s filmography.

One of the busiest actors today in Hong Kong cinema today, Louis Koo, brings in a wonderful performance as the conflicted drug runner turned informant Timmy, who finds himself at constant unease when he is forced to side with the police or be executed. Playing a Hong Kong man in China shows the differences in the laws of both the SAR and the Mainland. Sun Honglei helps as the Mainland captain in charge of putting Timmy in his place and does undercover duty in an attempt to play both sides of the dealers off by posing first as a notorious “snakehead” and then a maniacal laughing drug runner appropriately named “Ha Ha”, played by Hao Ping, whose constant laughter tends to bring a bit of comic relief to an otherwise serious film.

A nice twist to the story is the appearance of two mute brothers who show sympathy to Louis Koo’s Timmy, as they are loyal friends who are more than meet the eye in addition to the appearances of a group of seven people who are also connected to the deal who serve as not only silent partners but have high authority in the deal as well. This brings in the likes of frequent To supporting actor Lam Suet and another underrated supporting actor today, Gordon Lam. The final act is perhaps one of the most shocking scenes and definitely ranks up there with the final act of another thriller released that year, Firestorm.

Drug War is a worthy entry in the filmography of director Johnnie To, thanks in part to a nice smoothed out script with reliable twists and some great performances by Louis Koo and Sun Honglei and a finale that is well worth sticking your eyes to the screens.