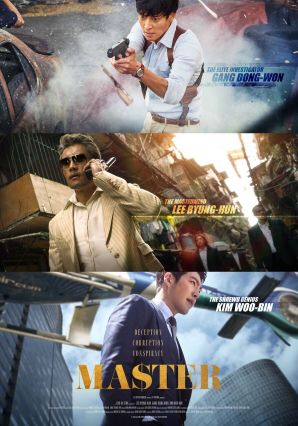 The world of financial corruption comes to a head in this Korean action thriller from Cho Ui-Seok.

The One Network is a financial company that plans to go global under the leadership of its chairman, Jin Pyun-Gil. However, Chairman Jin is accused of money laundering, yet there is no proof of his misappropriation of funds. A local investigation unit led by Capt. Kim Kae-Myung is responsible for tracking Jin down with the hopes to stop him. However, in an effort to achieve this, they force systems manager Park Jang-Gun to assist with the investigation in exchange for probation.

Park has only to only get two things for the cops in order to arrest Jin. The information from the data center and a ledger containing names that Jin has been in cahoots with. While Park does want probation, he fears something worse will happen if Jin learns of the double-cross and plots something unthinkable that can put everything at risk. Will Capt. Kim, who has had issues with the state prosecutor in the past, be able to get his reputation increased and get enough to get Jin? Or will there be something in store for all parties involved that they will never imagine?

Cho Ui-Seok crafts a very intricate action thriller revolving around the world of financial corruption with a stellar trio to lead the way. The film is truly a three-act film, and revolves around three characters and the efforts they try to achieve their goals whether it is justice, criminal, or just getting out of the situation. While it can lead to consequences, it is apparent, especially with the third act that things will come full speed ahead.

Kang Dong-Won is the good in brash investigator Kim, who leads the charge in tracking down any evidence and will do it by any means necessary to stop corruption in the finance world. Kang is tough, revealed to be reckless at times which explains why he is not exactly on the good graces of the local prosecutor, but he is committed to do his job. Lee Byung-Hun is the bad in Chairman Jin, who is truly a criminal mastermind who yes, has been involved in money laundering, but has all the necessary pull for him not to be busted in any way. He comes from the Gordon Gecko School of Finance but goes as far as bending the rules in that world to get ahead. He is more than a mastermind, he is truly the equivalent of a powerful crime lord but disguises it quite well.

While we have the good and the bad, there is a wild card in the mix and it is well played in the form of Kim Woo-Bin’s Park, a systems analyst forced into a situation he never wanted a part of and knows of the repercussions. However, while uneasy, he does have a sense of loyalty to justice in an effort to walk away with something as simple as probation where what he did could put him in jail for many many years. Park even provides a majority of the film’s comic relief when he is at verbal war with a fellow techie and in one funny scene, does a dance when he gets a promotion while being a mole for the police. In the third act, the true revelation of Park as a wild card is truly seen and proves to be a valuable asset for one of the two sides.

Master is an intricate action thriller revolving around the good, the bad, and a wild card in the world of finance and money laundering. The performances of the lead trio in Kang, Lee, and Kim truly drive this film and make this an exciting film to watch in its near two-and-a-half hour running time.