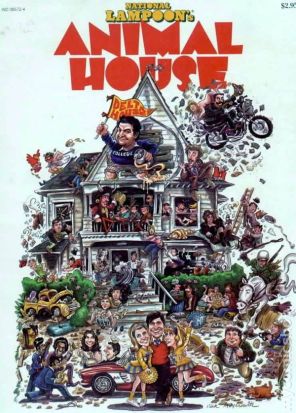 Revenge of the Nerds. PCU. Van Wilder. These are films that have defined perhaps the “fraternity” movie in the 80’s, 90’s, and 00’s respectively. However, this film is truly the ultimate “fraternity” classic that had it not been made, perhaps we would not have even seen anything like its successors.

Larry Kroeger and Kent Dorfman are college freshmen at Faber University. They are attempting to pledge fraternities. When they unsuccessfully attempt to pledge the superior Omega House, Kent convinces Larry to pledge with Delta House because Kent is a legacy. Delta House is the worst fraternity on campus due to the brothers’ hard partying ways and constant gimmicks. However, eventually Larry and Kent are accepted as the newest members of the fraternity and are given the nicknames “Pinto” and “Flounder” respectively.

Dean Vernon Wormer has had a plan to get rid of the Delta House since the beginning of the term. He places the fraternity on what he calls “double secret probation” and conspires with Omega House leader Greg Marmalard to find a way to have the entire frat house expelled. Despite the warning, the Deltas continue to cause chaos until it is too late and they hatch a plan to become the big men on campus once and for all.

From the minds of National Lampoon comes a true classic comedy about a college fraternity and their hijinx. Who will ever forget the late John Belushi’s classic scene in the cafeteria when he takes a cream puff in his mouth and spits it all over some Omegas and calls himself a “zit” or the famous performance of Otis Day and the band doing their rendition of the classic “Shout”? Or better yet, Twisted Sister fans will definitely know Mark Metcalf’s insane militaristic dad in their videos as a direct influence from his classic role of Niedermeyer here. While Belushi’s antics truly drive the film’s hysterical chaos, it has to be said that this is truly an ensemble film with a cast of characters that just have so many characteristics that could be said to be an influence on later “ensemble” films.

Belushi’s the drunken sailor type. Tim Matheson is the player as med student Otter. Peter Riegart is the lovestruck one as Boon with his relationship with Karen Allen’s Katy is a subplot in all the chaos. Tom Hulce is the newbie smart guy who proves not to be all brains after an incident. Stephen Furst is the nerdy pudge who attempts to gain his confidence. James Widdoes is the smart leader of the pack who constantly gets overthrown by the hard partygoers of the frat. One sees this eclectic cast of characters and one can think of John Hughes’ classic The Breakfast Club in a subconscious type of foremanner.

The film would mark the film debut of Kevin Bacon, who in this very film famously gets flogged and asks for another per his Omega loyalty. However, his flair for comedy comes in the insane climatic portion of the film in which, for those who haven’t seen this yet, will need to get their DVD players and find this title as soon as possible. Better yet, those who haven’t had the chance to see this yet, need to do just that. Get the film, rent it, buy it, who cares. This is truly a slice of Americana National Lampoon style.

National Lampoon’s Animal House is the definitive fraternity comedy. It may just want you to start a “food fight” and make you get out your “pledge ppppppin!!!” And okay, you might learn a thing or two about college in the process…*snicker*