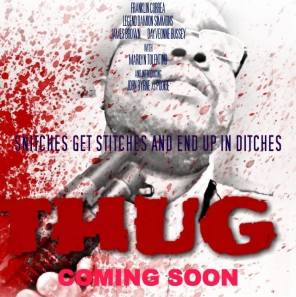 Randolph Waters, a filmmaking student in New Jersey, is planning a documentary on urban anthropology. He has found the perfect person to document for this project. The man’s name is Gino and he lives in the basement of his family home. He agrees to the project on a few conditions: no governments and do not talk about his child. Randolph agrees to Gino’s conditions but makes the mistake of accidentally calling him by his real name. When Gino brings Randolph back to his apartment to “finish” the documentary, he ends it by killing him by asphyxiation.

Gino himself takes over the documentary, directed by and starring himself. He realizes he loves killing and vows that if anyone does him wrong, he will have no problems killing them. When Lamarr Redstone, a Seton Hall University filmmaking student, is given $5000 to film Gino, he is excited and goes along with the plan until he makes the same mistake that Randolph had and he finds himself shot. While Gino’s rage soon becomes uncontrollable, he learns that an old friend may be out of prison and that those he had trusted may no longer be trustworthy. Will Gino be able to handle things the right way or will his rage become so uncontrollable that his own worst enemy will be himself?

If it is one thing about Franklin Correa’s films that must be said, it is that he can make any story work even with low budget values. While usually noted for his indie action films, where he showcases his martial art talents in realistic mode, with this film, he takes a different route. Deciding to take the found footage film and mesh it with a dash of crime with a touch of horror, Correa does quite well both behind and in front of the cameras.

Correa shines as Gino, the titular “Thug” of the film, who goes on a killing spree when filmmakers make the mistake of calling him by his birth name, or as he calls it the “government” name. Correa brings a sense of realism when he takes over the camera himself. Sometimes, when he goes insane when the other cameraman does wrong, it is unintentionally funny. However, the killing scenes are something that are well done and the film ultimately leads to an unexpected twist that makes this a watchable indie film.

Thug is a wild ride in the life of a man who will kill you if you do him wrong and say the wrong things no questions asked. Franklin Correa is the driving force of the film, both in front and behind the camera in this found footage indie thriller.

Thanks to Franklin Correa for allowing WFG to see the film!