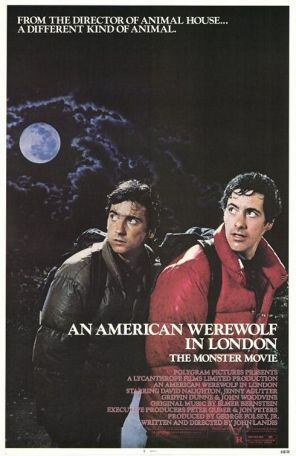 An American tourist learns the harsh truth of what’s going to happen in this Academy Award-winning horror film that only the likes of John Landis can come up with.

On a backpacking trip in England, American college students Jack Goodman and David Kessler stop by a local inn to ask for directions. The pub owner warns the duo to stay on the path and to never veer off into the woods. At first listening to the owner’s directions, they accidentally veer off into the woods and it is a full moon. The two are attacked by a menacing werewolf. Jack is killed in the attack but David is mauled and survives.

Awakening in a hospital, David becomes smitten with local nurse Alex Price. However, David also begins to experience nightmares which includes Jack, now a zombie, warning David that at the next full moon, he will turn into a werewolf and he must kill himself to end the curse. David, refusing to believe the story, is released and stays with Alex, starting a relationship with her. However, when the full moon does finally arrive, David does in fact transform into a werewolf. After killing some unsuspecting locals, he awakens in a zoo and learns the terrible truth. Will David be able to withstand the curse that has fallen upon him or will he have to pay the ultimate sacrifice to end the deadly curse of lycanthropy?

Who would have ever thought John Landis, a director known for his comedies, could construct a well-thought out horror film that would add elements of black comedy? Well, he succeeded with this tale of well, as the title indicates, an American in London who becomes a werewolf. The ingenious twist of the film involves the undead, who appear only to our titular werewolf in hopes to get him to kill himself before he wreaks havoc as a werewolf.

David Naughton, best known for that famous Dr. Pepper commercial with the jingle “I’m a Pepper”, really breaks out in the role of the titular American werewolf. While we don’t get to see that mode until well near the third act (more on that later), it is his visionary nightmares from hunting a deer in the woods in human form to waking up from a nightmare within a nightmare with yellow eyes and fangs along with his interactions with Griffin Dunne that help drive the film. The scenes with Dunne as one of the undead are quite fun where the term “walking meatloaf” can be said to describe a zombie based on this movie. Jenny Agutter only offers the role as a love interest who is not in distress but more of a concerned character in terms to her boyfriend’s eventual lycanthropy.

However, the film will be forever known not so much for the story and dark comedy, but the near four-minute transformation sequence, which earned special effects make-up artist Rick Baker the first Academy Award for Make Up in a Motion Picture. The sequence also made Baker a legend in the industry, shortly after leaving another film, The Howling, and consulted on those effects with one of his protégés, Rob Bottin, a legend in his own right. The transformation sequence, using the likes of “change-o-matic” effects to showcase the extending of limbs and also adding to the effect, some amazing acting from Naughton as he envisions his character feeling the horrible pain of the transformation, makes for one of the best transformation scenes in movie history.

An American Werewolf in London is truly a horror film that still holds today, thanks to the transformation sequence but with the addition of some dark comedy with some great performances by David Naughton and Griffin Dunne.