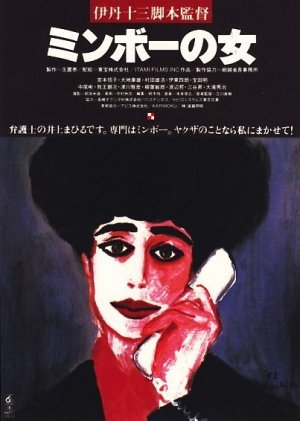 Juzo Itami’s satire of Yakuza politics would be forever known as the film that put the late director in real-life danger after its release.

A very prolific hotel is in contention to host an international summit. However, there holds one little problem. A local Yakuza gang finds the hotel the perfect place to extort guests and make the place their own home for entertainment. Determined to have the summit held at the hotel, the owner hires a lowly accountant, Suzuki, and a local bellboy, Wakasugi, to serve as “Yakuza managers”. Their job is to drive the gangsters out of the hotel.

However, it is clear these two can’t get the job done and in the case of Suzuki, he actually is forced to bribe the gang boss, who tells him if he needs anything to let him know. When everything begins to get worse and worse, they hire the services of Minaru Inoue, a lawyer who is skilled in the art of “minbo”. Minbo involves a form of reversal extortion that for Inoue, has proven successful in driving local gangsters out of establishments. With Inoue’s influence, the hotel staff slowly begin to get the motivation to stand up to the Yakuza. However, with the summit getting closer and closer, will it be too late?

Juzo Itami’s films are quite a meshing of subtle comedy mixed in with customs or satires of what happens in Japan in terms of society. For one reason or another, Itami decides to tackle the politics of the Yakuza in this comedy, in which they are played as deviants who just take over establishments and use methods of intimidation to get their way and/or extort money from the staff and in the case of this hotel, the guests as well. In one scene, when members Suzuki and Wakasugi, played with comic panache by Yasuo Daichi and Takeshiro Murata, try to confront the gangsters when they attempt to get their money back from a borrower, everyone looks at the confrontation and does not do anything about it.

Itami’s wife Nobuko Miyamoto, who had played more subtle roles in The Funeral and Tampopo, brings out one of her best roles to date. Going a complete 180-degrees, she plays Inoue as a tough talking, sassy woman who can turn the tables on the gangsters by using that sass to good effect. In the opening scene, she is mistaken for a gangster’s moll when she warns a trio of gangsters nearby a pool that the police are nearby and it would look bad for them if they continued causing trouble. Of course, she is totally using the art of lying to drive them away but it is clear she is that good and when she is hired, she decides to train the staff in helping them in this very delicate situation.

The film did result in a very dangerous situation. Five days after its initial release, members of the Goto-Gumi gang attacked Itami outside of his home. Itami ended up in the hospital and in an ironic twist, his stay in the hospital inspired him for his next film, The Last Dance. It is also long rumored and theorized that to this day, the Goto-Gumi may have been involved with the apparent suicide of Itami in 1997.

In any case, Minbo is truly one of Juzo Itami’s funniest films with Noboru Miyamoto driving the film in one of her best roles. It may be a satire and the real-life drama that ensued may have be insane, but this film is quite hilarious.