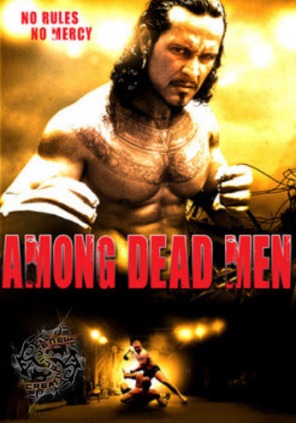 From co-writer and director James Richards comes this low budget Aussie martial arts action that is a mixed bag, especially when contrasting the fight scenes.

Bobby Delgado has been released from prison. A one-time champion in the underground fight ring, he accidentally killed his opponent, resulting in an eight-year sentence. Now free, Bobby just wants to start his life over again. However, there is someone who will not let that happen.

Jarvis Sweet, the manager of the man Bobby killed, is seething to get even upon learning of Bobby’s release. Sweet finds a new champion in former mob hitman Wade Bull, who has been making his way and annihilating his opponents. However, knowing Delgado will not just agree to return to his past, Sweet allies himself with a mafia mob boss to lure Delgado back into the fights. While Delgado does eventually get back into the fighting, he will need something more if he plans to defeat Bull and to do that, he must turn to Chinese martial arts master Ah-Hing for guidance.

Definitely an independent level film, writer and director James Richards got help from fellow Australian Peter West to write the screenplay. West is perhaps best known for creating Jason Blade, the hero of the 1980’s films Day of the Panther and Strike of the Panther. Fifteen years after coming up with the story and first draft, Richards and West finally got the film off the ground. With this film, Richards intended on using a very low budget of only $7,000 Australian dollars (that’s about $6600 US dollars) to make this action film with the clichéd theme of redemption.

The star of the film, Avelino “El Rico” Lescot, proves to be a jack of all trades here. Not only is he the lead actor, but he helped tweak the screenplay by adding the narrative himself, helped compose the music, and served as both producer and one of the fight choreographers. Lescot, who brings out an interesting look, does well for what he has to work with. He may look somewhat big, but the man can surely throw down. However, the film revolves more on how his character attempts to start a new life, even going as far as starting a relationship with local girl Blair, played by Kristy O’Leary. One scene where Blair out of nowhere just starts to dance and gets the attention of Delgado is reminiscent of a scene in DAY OF THE PANTHER, where Blade gets seduced through dance by his love interest. Truly a West-influence in the film.

The main bad guy fighter of the film, Wade Bull, is played by longtime veteran Ron Vreeken. Many might not know the name, but they have seen his face. Vreeken has worked with Richard Norton on a number of occasions. Perhaps their best known on-screen rivalry is in Rage and Honor II: Hostile Takeover (1993), where Vreeken sports long white hair as one of the main villains. The Dutch-born Australian-based stuntman and actor sports a more short brown hair cut here yet for reason, he has a bit of a striking resemblance to John Travolta. Vreeken also served as one of the fight choreographers, doing his own fights in the film.

How do the fights stand out in the film? Well, one thing is for sure and it’s that there is a true contrast between Lescot’s fights and Vreeken’s fights. While Lescot got help from director Richards, a martial artist himself, Vreeken manage to choreograph his own fights. Lescot uses a lot of close quarter moves, using fast punching, Muay Thai elbow strikes, and some basic kicks. Vreeken on the other hand employs a style more reminiscent to kickboxing and shows some decent footwork mixed in with grappling. The only disappointment is that their climactic fight could have been amped up better and taken a little longer. It felt a little rushed. Perhaps it was budget reasons, but even still, it just felt a little disappointing.

Nevertheless, with a budget of less than $7,000, Among Dead Men is not truly a bad indie film. The contrast in fighting styles between Lescot and Vreeken poses some curiosity, but don’t expect a great finale. Worth at least a rental if you need a time-waster.