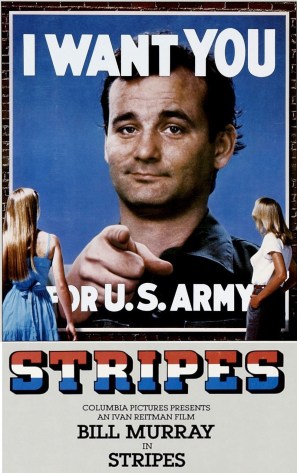 The Army will never be the same again when Bill Murray and Harold Ramis join in this hilarious comedy from Ivan Reitman.

John Winger is a hapless loser who has grown tired of his life after losing his job, his car, and his girlfriend all within the span of a few hours. He convinces his best friend, ESL teacher Russell Ziskey, that there is a solution to make something out of his life. That is to join the Army. Russell is not sure John is exactly the type of guy the Army would want, but when John is set on going, Russell is convinced to join John.

On the first day of basic training, John already incurs the wrath of drill sergeant Hulka. However, when Hulka is injured in a mortar test gone wrong, John surprisingly leads the group to a drill on graduation day and impressed with the fact they completed the training themselves, the general sends the platoon to Italy to serve as protectors of a new assault vehicle disguised as a RV. However, when John and Russell hijack the vehicle to pick up their MP girlfriends in Switzerland, they are mistaken for spies by the returning Hulka and Capt. Stillman. When those two and the rest of the platoon are kidnapped in Czechoslovakia, John and Russell decide to make things right and do the nearly impossible.

If you see the names Bill Murray, Harold Ramis and Ivan Reitman in the same movie, then you know you are going to be in for some comic fun of possibly epic proportions. After unleashing the summer camp comedy Meatballs (which Ramis only co-wrote, Reitman directed, and Murray starred), the trio return and tackle the Army.

Murray once again shines and shows his comedic genius as the troublemaker John Winger, who is first seen as a lowly cab driver who had enough of his job when he deals with the worst customer of his life, bringing his sarcastic wit to the role. It is clear he has the memorable lines of the film. Ramis is basically the conscience who tries to attempt to stop Murray from causing all sorts of trouble, yet he lets Murray take all of his own punishment when he tends to constantly be a thorn in the side of drill sergeant Hulka, wonderfully played by another late great, Warren Oates. Murray and Ramis also find love interests in two military police officers, played by P.J. Soles and Sean Young respectively and while the latter seems to be more what is expected in a romance film, the former, considering we’re talking Murray here, can be quite hilarious at times.

Aside from Murray and Ramis, the rest of the platoon highlighted bring either good acting or some fun comedy in their roles. One of the funniest is the character of Psycho, who refuses to be known by his real name or “he will kill you”. Another comic legend, John Candy, breaks out in this role with his role of Ox, who may be the big boy of the bunch but proves his mettle in of all things, a mud wrestling match. John Diehl plays the absent-minded Cruiser, who joins because he is worried he will be drafted (yet there was no more drafts in 1981). A pre-fame Judge Reinhold makes the most of his appearance as Elmo, trying to score drugs from Ramis before they leave for basic training.

The highlight of the film is truly the graduation sequence, where Murray leads the troops on a march complete with gun commands but done only one certain way. If you remember this scene, then you know this performance that oozes with “razzle dazzle”.

Stripes once again shows why Bill Murray, Harold Ramis, and Ivan Reitman were one of the best comedic teams of the 80’s with their amazing comic wit in front and behind the scenes. Definitely check out one of the funniest Army comedies made and “that’s the fact, Jack!”