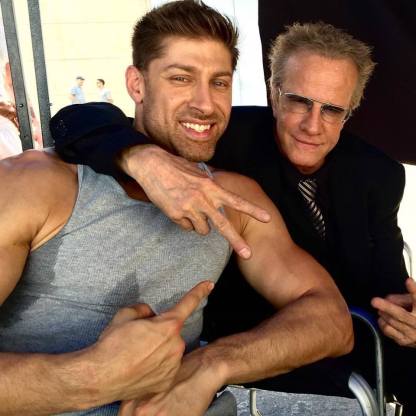 UPDATE (8/8/2016): The character played by Christopher Lambert has been revealed. Coming Soon reveals the character is Thomas Moore, an ex-Patriot and martial artist who is the man responsible for forcing Alain Moussi‘s Kurt Sloan to go to prison and face the beast Mongkut (Bjornsson). Moore is the Godfather of Thailand’s underground fight ring.

In a very unexpected announcement during the week, it was made official at the press conference of Kickboxer: Retaliation that Christopher Lambert has joined the cast of the new sequel. Here he is on the set with the film’s lead actor Alain Moussi, who reprises his role of Kurt Sloan in the sequel.

Lambert, forever known as the original Highlander as Connor MacLeod, has an unspecified role but considering his suit, it may look like a bigwig involved in the major fight that will pit Moussi’s Sloan against the new beast Mongkut, played by Game of Thrones‘ Hafthor Julius Bjornsson.

The film is still currently in production in Thailand under the direction of Dimitri Logothetis, who co-wrote the film and produced this installment as well as wrote and produced the first film of this new rebooted saga, Kickboxer: Vengeance, due for release on September 2.

Kickboxer: Retaliation is scheduled for a release sometime in 2017.