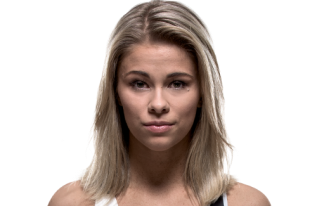 As production in Thailand is underway for the sequel Kickboxer: Retaliation, some news has emerged involving some recent casting of two UFC fighters.

Paige VanZant, who was set to make her film debut as the character of Gamon, has dropped out of the film and instead will focus on an upcoming fight against Bec Rawlings. Instead, originally having a small role as a prisoner in the film, it looks like Roy “Big Country” Nelson will have a more expanded role in the film.  Here is what producer Rob Hickman had to say about Nelson’s now expanded role of a prisoner preparing for a “death match”:

“Roy’s determination during our Vegas shoot, as he worked alongside Mike Tyson and Ronaldinho, showed us that he obviously has a genuine love for the screen. His intriguing performance has led our team to expand his role in the film and we believe this could open further doors, ultimately being a cross over opportunity for him. Roy will now be heading to Thailand to work with the rest of the cast.”

Nelson made his film debut with a small role in the direct-to-DVD sequel The Scorpion King 4: Quest for Power in 2015. Nelson will also have a role in the upcoming Sharknado: The 4th Awakens, set to air next week on SyFy Channel.

Kickboxer: Retaliation is set for a 2017 release date while its predecessor, Kickboxer: Vengeance will be unleashed on September 2 in theaters and VOD.