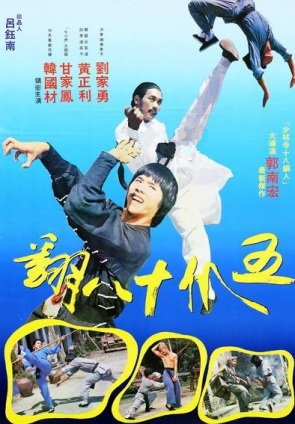 Sammy Lau of the famous Hung Gar family takes on the superkicker Hwang Jung-Lee in this kung fu action that has an interesting twist to the story.

The Lung family are skilled experts in the Dragon style of kung fu. The patriarch, Chen-Tien, is the head of a local school while his son Hsia is a student. Things about to come to a head when Ling Ko Fung has returned after being exiled from the clan. Ling Ko Fung was once the lover of Li Hua, Hsia’s mother and Chen-Tien’s wife. Ling plans to challenge Chen-Tien for the leadership of the clan but decides to wait until Chen-Tien is recovered from being sick. Soon, it is revealed that Hsia was the result of Chen-Tien raping then marrying Li Hua.

When the challenge finally ensues, Ling combines Dragon style with his kicking prowess to overcome and ultimately kill Chen-Tien. Hsia, planning to seek revenge, learns he is not able to stand up to Ling as he is thrashed and nearly killed by Ling. A local medicine man, who has been constantly bothering the Lungs, not only heals Hsia but trains him in a special technique of the Dragon style that has long been lost. Meanwhile, Ling has learned the tablet that earned him the leadership is a fake and he sets out to kill anyone to retrieve the tablet.

Joseph Kuo has been known to make some pretty good kung fu films, including the well-known 18 Bronzemen series. For this film, he adds quite a pretty intricate twist towards the end of the first act, when we learn that our hero’s father wasn’t exactly the noble master we think he is with the film’s opening. This twist brings a bit of shock value, but it seems he has somewhat repented for his transgression by marrying and raising his son. By the end of the second act, there is another twist that involves the hero’s kung fu teacher after the death of his father about who he could actually be as we know him as “Old Man”.

The hero of the film here is played by Sammy Lau, aka Lau Ga-Yung. His uncle is the legendary martial arts master Lau Kar-Leung and this Lau is quite great to watch as he makes the family proud with his fight scenes. In addition to his fight scenes, Lau does bring a bit of fine acting in the role of Hsia, who like his mother, has forgiven his father for his transgression.

The villain here is a fan favorite, the Korean superkicker Hwang Jung-Lee. As Ling Ko-Fung, Hwang gets the chance not only to use his trademark leg work, but even pull off some crisp hand techniques when combining with the kicking. Yuen Qiu even gets in on some action as the matriarch of the family, thanks to her experience in the Peking Opera school (for those not in the know, Yuen Qiu was Jackie Chan’s classmate). Hwang’s two henchmen, appropriately named Red Man and Green Man, are well played by Chu Tiet-Wo and Chan Liu.

Dragon’s Claws is actually a pretty good kung fu film that brings some intricate twists in the story, plus the film is driven by lead stars Sammy Lau and Hwang Jung-Lee, who are in fine form in the film’s action sequences.