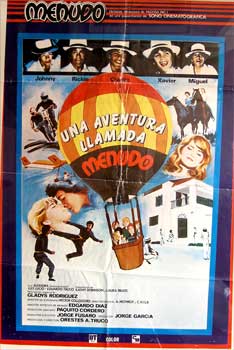 The Puerto Rican boy band crash land at the estate of an elderly obsessed fan in their second film to hit the screens, complete with a Grammy-nominated soundtrack.

Menudo has been given a chance to tour South America for a total of four months, beginning with Ponce. When the budget for travel seems a bit tight, Ricky comes up with an idea he thinks is brilliant. He decides the band should travel by hot air balloon. Of course, the idea becomes disastrous when the hot air runs out and the band crash lands in a small forest. Trying to figure out where they are, the group look for anywhere they can reach their tour manager.

Eventually, the group finds the estate of Señora Mia, who happens to be a fan of the group. However, she has let her age define her as she feels that she can’t be as hip as her nieces, who are staying with her. While the group spends their time at the estate awaiting word from their manager, Johnny falls for Clara, one of Mia’s nieces and as the band perform musical numbers, Mia sneaks a peek from her window. While she is afraid that her age is defining her, she doesn’t want the band to leave. When the band learns of Mia’s issue, they decide they must make her feel good about herself and not be ashamed of her fandom for the band.

Well, let’s just face it. Normally, when bands take on the lead roles in films, the film ends up not being great for the most part. Yet, in some cases, like the recently reviewed KISS Meets the Phantom of the Park, they end up having a sense of nostalgic cult value. Then, there is the rare exception like Prince’s Purple Rain, which was a huge success. So, what is the result of this second film starring Puerto Rican boy band Menudo? It can pretty almost rank up there as a cult film that just puts the band in some insane situations. It’s not so much like the Beatles’ A Hard Day’s Night, but more like a standard film in which we see the band just singing and dancing their way throughout the film.

The two members of the group who become more or less the focus of the film in terms of their characters are Ricky Mélendez and Johnny Lozada. Lozada falls in love with one of the nieces of the estate owner and even serenades her with a song appropriately named “Clara” named after the character with the band. As for Mélendez, it is he who becomes the big schemer whose plan fails and throughout the rest of the film, becomes more or less, the comic relief of the film.

Now, this is how crazy the film has a tendency to get. In one scene where the band decides to go joyriding on motorcycles, they somehow come across a group of karatekas who kick them off their bikes and it is done to music of course before meeting up with another band of motorcyclist teenagers who learn that when it is Menudo, they ask them for an autograph for one of the teens’ sisters. It will make one go “Huh?” The film also tends to drag a little bit but nothing unexpected.

The soundtrack was nominated for a Grammy Award for Best Latin Pop Album upon its release in 1982. The songs are the driving force of the film, including some of the group’s most well-known songs in the pre-Ricky Martin era of the group.

If you are into nostalgia and cult musicals, then you might end up somehow liking Una Aventura Llamada Menudo, but overall, one can only wonder what the point of this movie is. However, the hardcore fans of the group will love the music.