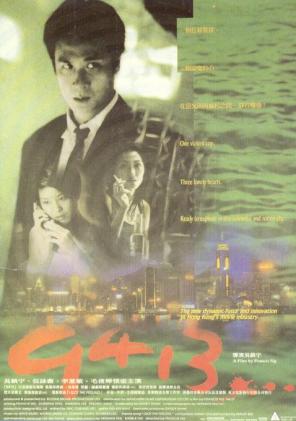 Hong Kong police officer Smash-Head accidentally shot a female hostage but was cleared of all charges thanks to his corrupt boss Officer Kar. However, this action has caused Smash-Head to go crazy. He tends to bust criminals without identifying himself and he spends his off duty time dancing and going to nightclubs.

However, when he is given a chance to see psychiatrist Dr. Carmen Leung, he begins to slowly feel a sense of redemption. However, while he makes progress, he still has to deal with Officer Kar and his shady dealings. When is ultimately forced to choose sides, Smash-Head delves into depression and madness but decides he must make the right decision.

Francis Ng is definitely quite a talent in Hong Kong. Perhaps best known for his role of Ugly Kwan in the first Young and Dangerous film, he makes his directorial debut here with Sandy Shaw’s script about a cop forced to go bad but seeks redemption.

Ng looks to be perfectly suited for the role of Smash-Head, the police officer who enters a downward spiral because of an accident. As a result, he is forced to deal with his dirty boss’s dealings for money and finds an outlet in going towards depression as well as spending plenty of time at the clubs doing his thing. Smash-Head even goes as far as going to the local nightclub just to see club girl Mandy, played by Amanda Lee. However, despite all the madness, there is a very funny scene worth mentioning.

At a local club, Smash-Head yells at the band for being too boring. When the band plays a more upbeat tune, he gets excited and not only dances, but goes as far as stripping down to his skivvies for the crowd. This is perhaps the only comical scene to break away from the seriousness of the film and it is quite langh out loud. While the character of Smash-Head may seem at first a comical character due to the nature of his character, it is more than that as the film progresses.

9413 is a pretty good directorial debut for actor Francis Ng, combined with his performance and Sandy Shaw’s script about a man who is internally combusting and forced to do the right thing.