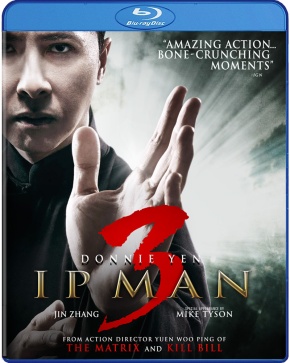 Five years after we last saw Donnie Yen as Wing Chun grandmaster Ip Man, Yen is back and this time he has two new contenders to deal with, one being legendary boxer Mike Tyson.

In 1959 Hong Kong, Wing Chun master Ip Man has earned the respect from virtually everyone in the area. When Ip’s son Ching gets into a school fight with a youngster named Cheung Fong, Ip is able to settle things peacefully and offers the newcomer Fong dinner until his father arrives. Fong’s father, Cheung Tin-Chi, is another Wing Chun exponent. However, struggling as a rickshaw driver, Chi competes in illegal fights run by Ma King-Sang to earn some extra money.

Sang’s boss is Frank, a real estate developer who needs the property of the school so he can develop some new property. However, Sang uses ruthless methods to attempt to get the property. Ip Man comes to the rescue and serves as a guard to ensure everyone’s safety. This begins to affect his relationship with his wife Wing-Sing. When Ip finally settles the score with the school issue, he is about to learn some shocking news that will change his life forever. Meanwhile, Chi, who has become to become jealous of Ip’s reputation, decides to make his name known as the best Wing Chun master. When Chi challenges Ip to determine who is the best at Wing Chun, who will become the victor and at what cost?

The duo of director Wilson Yip and star Donnie Yen have finally returned for this long awaited third installment of the film series revolving around Wing Chun grandmaster Yip Man, whose name had to be shortened to Ip for copyright reasons. The script, written by Edmond Wong, Jill Leung, and Chan Li-Tai, is a step up from the previous installment. While the second film focused on Ip’s arrival in Hong Kong and his having to deal with other martial arts masters of various forms and even a foreign boxing champion, this installment revolves around life and the choices made by those in the film. The film gives a message of sorts not only about choices but brings a sense of positivity and in some aspects, respect and love for others.

Donnie Yen once again shines in the role of Ip Man, this time a little elder. The opening is a fun little scene where we finally get to see Bruce Lee, in the form of Danny Chan. For those unfamiliar, Chan played Bruce Lee in a 2009 series, The Legend of Bruce Lee, and played a Bruce-alike soccer goalie in the 2001 film Shaolin Soccer. It was only fitting he play the role as Lee, who shows Ip how fast can be. Aside from one other small scene, this is the most we will see in terms of Ip’s relationship with Bruce Lee. Yen really gets to show some dramatic skills in part to his chemistry with actress Lynn Hung, whose character of Ip’s wife Wing-Sing is given a very vital and crucial part of the story. And it all goes back to the film’s theme of love and respect for others, especially those who are by one’s side.

Mike Tyson truly is a delight to watch as Frank, the real estate developer who attempts to get the school for himself. However, we also see that Frank isn’t all that of a bad guy and the proof comes when we see him with his wife and young daughter. He even finds himself impressed with Wing Chun when he sees Cheung Tin-Chi fighting in one of the illegal fights. As for Max Zhang, the former martial arts champion turned actor once again shows why he is one of today’s top action stars to watch. While Zhang is primarily known for playing villains, it is safe to say that like Tyson’s Frank, he’s not a completely bad guy, but his actions comes out of jealousy and knowing that Ip Man is a Wing Chun master who everyone knows, his character of Chi only wishes to get noticed and yes, he may resort to unorthodox methods to do so, but when we first see him, he shows a more softer side. As a matter of fact, he deserved his nomination for Best Supporting Actor at this year’s Hong Kong Film Awards (Ed. Note: Zhang lost to Port of Call‘s Michael Ning).

Replacing Sammo Hung as action choreographer for this installment is Donnie Yen’s former mentor, the legendary Yuen Woo-Ping. Those who may have felt somewhat disappointed with Yen and Yuen’s collaboration on Crouching Tiger Hidden Dragon: Sword of Destiny can breathe a major sigh of relief and this is a hundred times better. Yen engages in quite a few fights here, some with actor Louis Cheung by his side as Ip’s student Lik. Cheung, who is actually a Wing Chun practitioner himself, holds quite well when he fights. But that’s just a tip of the iceberg.

Yen has three stellar fights in total here. The first is against a Thai boxer Frank hires, played by stuntman Sarut Khanwilai (aka Simon Kuke). This first fight starts in an elevator with Lynn Hung watching before Yen and Khanwilai duke it out in the hallways. This fight has some beautiful overhead takes and is beautifully edited. The second is the Yen-Tyson fight and one can only compliment Tyson for his professionalism and showing he can adapt well with fight choreography. He even suffered a broken finger in real life on the set shooting this fight scene. The finale pitting Yen and Zhang is truly not a disappointment and not only showcases both actors’ skills with weapons but their Wing Chun is truly impressive in this climactic fight.

In conclusion in terms of the film, Ip Man 3 is a major step above the previous film, which is already pretty good. The film not only has some great action, but a well played out storyline that allows Donnie Yen to once again showcase his dramatic side and the addition of Mike Tyson and Max Zhang in pivotal roles, plus a wonderful acting performance by Lynn Hung makes this truly one to see.