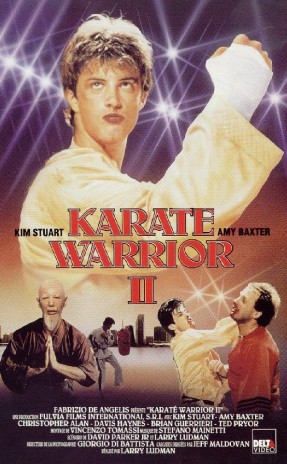 The inevitable had occurred when Italian schlockmaster Fabrizio de Angelis unleashed the 1987 Karate Kid-rehash that was Karate Warrior, starring future Italian heartthrob Kim Rossi Stuart. Both return for this unprecedented sequel, which surprisingly is still cheesy, but offers just a little better in the fight department.

Stuart returns as Anthony Scott, the hero from Karate Warrior. After defeating his nemesis Quino in the Philippines, he has returned to Miami. He remembers Master Kimura’s training and had continued training on his own. However, Anthony is prepared for a new challenge: college. When he is offered a new car from his grandparents, Anthony heads to a new town, and soon, a new challenge.

On his way to his new place to live, Anthony runs afoul of a local gang known as the Tigers. Their leader, Dick Anderson, is much feared and a karate expert. Meanwhile, Anthony finds a new friend in wealthy braniac Luke, who warns Anthony of the Tigers and their use of martial arts to terrorize people. While Anthony tries to confront Dick and the Tigers for damages to his car, he defends himself but refuses to fight.

The reason behind Anthony refusing to fight Dick right away is clear. Before returning to Miami, Anthony made a promise to Master Kimura that he would not use his martial arts skills unless it was in a fair competition in a ring. When Anthony offers to face Dick in a fair competition, Dick accepts but plans to use dirty tactics to get an advantage over Anthony. When his tricks don’t work and Anthony wins, Dick has an ace in the hole. Tigers founder and karate expert Mark Sanders has been released from prison and is paid a sum of money to take on Anthony in a competition.

Where Karate Warrior failed miserably, it seemed to somewhat look a tad bit better in this sequel. While lead actor Kim Rossi Stuart still fails here in the acting category, he works with a more competent stunt team this time around and looks a little better in the martial arts department, even though Stuart is not a real martial artist. It is obvious when one sees this film that there is going to not a drop of Oscar-worthy acting, but rather more some pretty ridiculous acting. What doesn’t help at all is the very atrocious dubbing used for the characters. Perhaps the most ridiculous dubbing comes from the character of love interest Patty, played by future Penthouse Pet Amy Lynn Baxter, in which she is given a Southern belle accent.

As with the previous entry, Master Kimura does return and arrives for the first time in America. This time around, Master Kimura is played by Leon Elalout. While Elalout has a small resemblance to original Kimura actor Ken Watanabe, his foremanner seems reminiscent of Miyagi’s Buddhist monk buddies in The Next Karate Kid (1994). He just doesn’t have that brand of impact that Watanabe’s Kimura had which made the film barely watchable.

While the action scenes from the first film went beyond the utterly unwatchable, especially when it came to the very cheesy effects of the finishing technique, the action in this sequel is slightly better. Perhaps it is the fact that de Angelis gave himself a bigger budget and therefore, was able to shot the film in the United States and get a more competant stunt co-ordinator. Stuntman and martial artist Jeff Moldovan brought the action to a more faster pace and surprisingly makes Stuart look somewhat competent as if reminiscent of James Ryan in Kill or be Killed. Thankfully, there is no cheesy blue-light effect when it comes to the so-called punishing “stroke of the dragon”. The film’s main two bouts featuring Stuart against Christopher Alan and B-movie legend Ted Prior (who would only a year later co-star with Hong Kong legend Carter Wong in the low budgeted Hardcase and Fist) make the first film’s action look like a real bad case of limburger cheese.

Stuart would depart the series after this installment and make a name for himself in the world of Italian television and cinema, obviously improving on his thespian skills. Meanwhile, Fabrizio de Angelis would make four more sequels from 1991 to 1993, with Ron Williams taking over as new “Golden Kimono Boy” Larry Jones.

While it will never compare to anything churning out of Hollywood or Hong Kong during its time era, Karate Warrior 2 is a slightly better effort from Fabrizio de Angelis. While the acting is flat out retched, the action here is surprising a little improved over its predecessor.