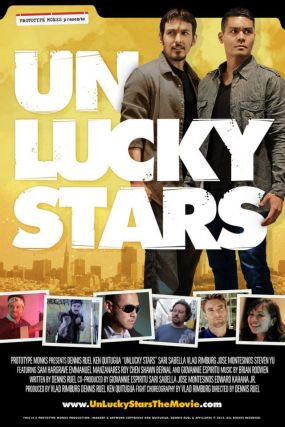 Dennis Ruel leads a cast of some amazing stunt fighters on the indie circuit in this homage to Hong Kong 1980’s action cinema.

Peruvian action star Tomas De La Cruz owes $15,000 to local bookie Carl. His son Sam sends many to look for Tomas. By chance, Sameer Youssef, an avid fan of De La Cruz runs into him at the train station. Meanwhile, as Tomas is being hunted down, unemployed waiter Josh has been given a chance to work as a private investigator in lieu of an old friend who is on leave to become a father. Josh’s partner is the veteran Ken Champuco, who tests Josh and is impressed with his fighting skills.

The duo take on various cases at first. However, when they bust a deal involving members of Carl’s organization, things comes to ahead. Meanwhile, Sameer, who is a wannabe action star, berates stuntman David, who quits during production due to his anger towards Sameer. Even worse, Sameer has proven to be extremely difficult with production. What will happen when the lives of Ken, Josh, David, Sameer, and Tomas all eventually interconnect into a world of chaos?

In the tradition of independent martial arts cinema with the likes of The Stunt People (Contour, Death Grip) and the short films of guys such as LBP Stunts Chicago and Martial Club, this is truly a dream film for the indie martial arts film industry. The film, written and director by Dennis Ruel, has an interesting premise that pays homage to the 1980’s fun action comedies of Hong Kong, notably those films from the triple threat of Sammo Hung, Jackie Chan, and Yuen Biao.

Ruel and Ken Quitugua show some great chemistry as the mismatched PI duo of Josh and Ken, who clearly have different mindsets due to their experience. Ruel is the timid rookie PI who is at first looking for work and grows to be serious about the job, despite some reservations. Quitugua is the veteran PI who sees something in the rookie yet feels that he must prove himself. Vlad Rimburg is the stuntman who unwittingly gets himself into the mix when the one person who really get him mad ends up on some reality TV series.

Sari Sabella is quite an annoyance (and thankfully, it is written that way) as the arrogant wannabe action star Sameer. Sameer idolizes Peruvian action star Tomas, played by filmmaker Jose Montesinos (American Brawler) and tries to channel that action star brashness, but not in the best of ways. Sam Hargrave hams it up quite well as Sam, who serves as the villain of the film alongside a trio of assassins played by Emmanuel Manzanares, Roy Chen, and Lucas Okuda. Steven Yu provides some comic relief as Stan, Ken and Josh’s handler, who while helping the duo shows how much he doesn’t like Josh just through his comical facial expressions. There is an unexpected but surprisingly awesome cameo from a certain actor from a well-known 1989 American martial arts film as well as comic performance by Power Rangers Dino Charge‘s Blue Ranger, Yoshi Sudarso, as a carjacker who constantly gets himself into a pickle.

Vlad Rimburg took charge of the film’s fight scenes and they are nicely done. There are lots of nice moves from the cast members. Dennis Ruel shows why he is one of this generation’s top notch superkickers with Ken Quitugua showing a more close quarter style of combat. As for Rimburg himself, his character of David is like an American version of Sammo Hung, and uses that to his advantage. A standout fight is a three against many fight inside a church where the head dealer looks similar to a certain villain of the final Jackie-Sammo-Yuen hit film, Dragons Forever. The finale is nicely done as well with the top players involved and show why they deserve recognition.

Unlucky Stars is a fun homage to 1980’s Hong Kong action film that works well thanks to the performances of its cast, some nice comic relief thrown in, and some nicely shot fight scenes. A fun film worth seeing.