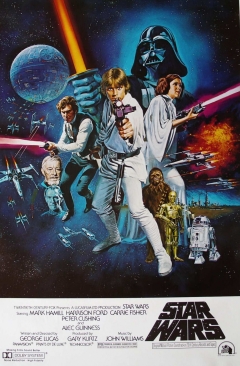 A long time ago, in a galaxy far, far away…one of the greatest sagas in cinematic history began with the tale of Luke Skywalker.

A civil war is brewing in a galaxy and the sides involved in the war are the Galactic Empire and the Rebel Alliance. Princess Leia Organa of the Alliance has successfully retrieved plans for the Empire’s heavily armored space ship, the Death Star. However, she has been captured by the Empire’s deadly Sith Lord, Darth Vader. What the Empire doesn’t know is that Leia had his the plans in the memory of the droid R2-D2, who flees to the desert planet Tatooine along with C-3PO, where one young man’s life is about to change forever.

Upon their arrival to Tatooine, the droids are found and sold to Owen and Beru Lars, who live with their nephew Luke Skywalker. Luke is cleaning R2-D2 when he sees part of Leia’s message. Leia requests help from Obi-Wan Kenobi. Luke learns that an old hermit named Ben Kenobi is actually Obi-Wan. Luke, who had heard stories about the Clone Wars, with support from Aunt Beru and Uncle Owen, decides to help Obi-Wan, who in return offers to teach him the ways of the Jedi. Hiring mercenary pilot Han Solo and his Wookiee sidekick Chewbacca, the group flies to Alderaan, where it is too late as the planet has been destroyed by the Death Star. Luke and Han join forces to rescue Leia, but in the midst of the rescue, Obi-Wan faces Darth Vader and is killed in the duel. Now, this trio of heroes, along with Chewbacca and the Droids must set up a plan to destroy the Death Star once and for all.

It all began nearly forty years ago with this very first installment of the saga, which is actually the fourth episode of the entire Star Wars universe. While Lucas had planned and mapped out the saga, for one reason or another, he started out with this installment. The film truly created a trio of major breakout stars, all of whom hadn’t been well known until this film. Mark Hamill embodies the young Luke Skywalker as someone who is enthralled with the Clone Wars from the stories he had heard and even finds himself a preliminary mentor in Obi-Wan Kenobi, played by the veteran Alec Guinness. Harrison Ford, who prior to this had a pivotal role in Lucas’ debut feature film, American Graffiti, brings us Han Solo, the wise-cracking, smart-mouthing mercenary pilot who despite only caring about escaping the clutches of his enemies, proves to be a reliable ally in times on need. Carrie Fisher is great as Princess Leia, who seems to have some sort of connection to Luke, and provides the perfect counterpart to Han Solo’s wisecracks.

Kenny Baker and Anthony Daniels provide a bit of comic relief as the droids R2-D2 and C-3PO while Peter Mayhew hams it up as the Wookiee Chewbacca. David Prowse is exciting to watch as the evil Darth Vader, with his voice work done by another legend, James Earl Jones. Hammer Films veteran Peter Cushing plays Grand Moff Tarkin with a combination of class and pure evil.

Lucas’ influence with this film may come as a surprise, but it is actually a Japanese samurai film, The Hidden Fortess, directed by the legendary Akira Kurosawa. This could explain why the main battles of the film are that of using lightsabers as opposed to say guns. Yet, we see plenty of aerial forces blowing each other up in this film, but duels are settled with the lightsabers, bringing that sense of samurai spirit in the characters. Of course with this being a sci-fi film, the added touch of telekinesis defines the Force. While the only true lightsaber battle in the film is that between Obi-Wan and Darth Vader, the aerial combat scenes that make up the final act of the film is well done. As for this being the only true lightsaber battle in the film, it is just a taste of things to come for Lucas and the Star Wars universe.

Star Wars Episode IV: A New Hope is truly one of the greatest films in sci-fi history, with great performances by the cast. This “fourth” episode of the saga ranks as one of the best!