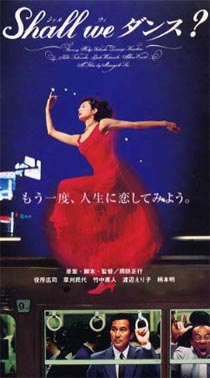 This award-winning Japanese film is a fun delight about living life through the art of dance, and it would be the inspiration for a 2004 Hollywood remake.

Shohei Sugiyama is an accountant who leads a humdrum life. He spends his days working and then hanging out with co-workers and coming home to his wife and daughter. It has reached a point in his life where the same routine is starting to make him feel depressed. One night on the subway, he sees a woman in the window. The following night, he decides to go to the dance studio where he learns the woman, Mai Kishikawa, is the lead instructor. He begins to take dance lessons and while he is infatuated with Mai, his teacher is the more mature Tamako Tamura.

As Shohei begins to learn the art of dance, he becomes shocked when he discovered that his co-worker, Tomio Aoki, has been taking up dance but must disguise himself out of embarrassment. Under the tutelage of Tamako, Shohei begins to realize that it’s not Mai, but the love of dancing that has revitalized him. As he becomes more vibrant, his wife is worried he is having an affair and hires a professional detective. In the meantime, the usually stern Mai also sees Shohei’s passion for dancing and something in her begins to spark, something she has never experienced when it comes to dancing. Everything goes down when Shohei competes in an amateur competition with the very mouthy Toyoko as his partner.

From writer-director Masayuki Suo, it is clear why this film is one of the most beloved Japanese films of the late 1990’s. In a cinematic world usually known for its anime as well as hardcore style of action and horror, the occasional comedy and adaptation of anime is welcomed. This comedy is truly one for the ages thanks to its intricate story, whose theme is living and enjoying life, all seen here through the world of dance.

Veteran Koji Yakusho is great as accountant Shohei, who starts out fascinated with the lead dance instructor only to realize that something has sparked him and that’s dancing. One may seem annoyed for the first half of the film with Tamiyo Kusakari’s lead character of dance instructor Mai. The reason is because in the first half of the film, she is more stone-faced and stern. However, an hour into the film, when she smiles for the first time after being impressed with Shohei’s improvement, it is clear that “the teacher can also learn from the student”.

For those who saw the 2004 remake with Richard Gere and Jennifer Lopez in the lead roles, Stanley Tucci’s character was the big-time comic relief of the film with his flamboyant style of dancing. Tucci’s role is based off the character of Aoki here, played with laugh-out loud laughter by Naoto Takenaka, who practically steals the show in his role while Eriko Watanabe makes a very good comic counterpart as the constantly-complaining Toyoko. Hideko Hara does quite well as the first loyal then somewhat dejected wife of Shohei, who only wants her husband to be happy and when she realizes what he has done, she is still in shock but accepts and supports her husband’s newfound love. Finally, Reiko Kusamura is wonderful as the talented dance mentor to both Shohei and in a sense, Mai herself, who teaches them that dancing is more than just steps.

The dance scenes are beautifully shot with vibrant color and depth in terms of choreography. Kudos goes to Toshio Watari, who served as the film’s dance choreographer. He makes the cast look exciting, even Takenoko has to dance Latin in a very comical flamboyant kind of way. All these elements of story, characterization, and movement truly mesh well and it is clear why it would win the Best Film as well as 13 other awards at the Japanese equivalent of the Academy Awards in 1997.

Shall We Dance is a very exciting look at living life through dance with great performances by Koji Yakusho, Reiko Kusamura, and the nearly show-stealing Naoto Takenaka. It takes time to warm up to Tamiyo Kusakari, but once she changes, you will love her performance as well. Regardless to whether you’ve seen the Richard Gere-Jennifer Lopez version, this is truly one Japanese film to check out.