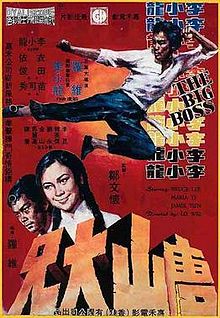 The legendary Bruce Lee makes his first martial arts action film in Hong Kong with this tale of a man who must break a vow to avenge his family.

Cheng Chiu-On is a young man who moves to a small village in order to change his life. He has made a vow to his late mother never to use his fists. For the first time, he meets his cousins Hsu Chien, Kun, Pei, Chiao Mei, and others. Hsu gets Cheng a job at the local ice factory, where he accidentally makes the mistake of dropping an ice block on his first day. While being confronted by one of the workers, two of Cheng’s cousins discover something in the ice. When the cousins meet with the manager that night, the manager confesses that drugs are being hidden in the ice. They are later killed when they refuse to cover up.

With the cousins’ disappearances, Hsu and another cousin head to the home of ice factory owner Mi. Mi and his son, along with some of the workers of the factory, confront the duo and ultimately kills them. The next day at the factory, a major fight breaks out and Cheng is finally forced to break his vow when the jade pendant his mother gave him as part of the vow is broken. Finally having enough, Cheng uses his kills to take on the duplicitous workers and is made foreman of the factory as a cover so he will not learn the truth. However, having lost respect from his cousins, Chiao learns the truth and wages a one-man war to avenge his family.

A lot of people know the story by now that when Bruce Lee returned to Hong Kong in 1971, he was approached by both Shaw Brothers and Golden Harvest. Having turned down Shaws’ offer, Lee turned to Golden Harvest and made his first action film in Hong Kong. Writer-director Lo Wei, who would later have a notorious rivalry with Lee and later Jackie Chan, came up with a vehicle that would have Bruce play a young man who would not use his skills due to a vow until he is forced to fight.

Lee, who was a child and teen in dramatic films, gets a chance again to show that side for a good portion of the film due to his character having become a pacifist. However, a first taste of action comes when he gives a double elbow and double backfist to two goons fighting his cousin Hsu, played by James Tien. However, the pivotal scene for Lee comes during the all-out rumble at the factory when his cousins demand answers after the disappearances of their family members. This is where we see Lee in heroic form and showing how fast he is with his feet when he kicks a knife out of one thug’s hand followed swiftly by a kick to his head.

Maria Yi plays it cute as Chiao’s cousin Chiao Mei, who seems to have a liking to Lee’s character while James Tien makes the most of his screen time as Hsu, the level headed cousin who is also the true leader of the group with his kung fu skills. Lee Kwan plays the sometimes goofy and wisecracking Ah Kun, whom is the first not to take it easy on Chiao when he is promoted to foreman and is more focused on dinner with the manager instead of trying to find the missing cousins. Han Ying-Chieh, who also choreographed the film’s action scenes, is an interesting watch as Mi, the titular “Big Boss” while Anthony Lau plays the boss’s unscrupulous son, who looks to be in charge of the other racket Mi is involved in.

It is clear with Han’s style of bare-fisted action that there is a notable difference in styles between himself and Lee. James Tien looks okay when he fights, but his style is more of a flailing rift while when seeing Lee, is more of a fluid and swift style. Lee gets the best action of course, taking on multiple opponents on three occasions before his climactic fight against the Big Boss himself. The opening of the climactic fight begins with another one-on-multi fight where Lee kicks two goons and proceeds to put his snack in his mouth while the goons wither in pain. This is merely a taste of what we would get for Lee in his later films.

The Big Boss was just the beginning for Bruce Lee in terms of a resurgence in Hong Kong action cinema. His character couldn’t be any more perfect as a pacifist forced to fight and when he fights, they are nothing short of exciting.