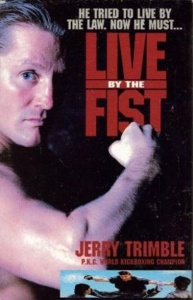 Former champion kickboxer Jerry Trimble is in prison where he must survive the only way he knows how, to live by the fist in Cirio H. Santiago prison film that combines elements from the Filipino jungle prison film with Bloodfist III: Forced to Fight.

Ex-Navy SEAL John Merill is about to go to sea once again when he hears a young woman screaming as she is attacked by a band of thugs led by Chavez. Merill fights them off but Chavez proceeds to kill the woman and during the struggle against John, is stabbed. Merill is soon knocked out by one of Chavez’s thugs and framed for the murder of the young woman Chavez killed. Sentenced to life imprisonment, John is sent to the Bolera Prison Colony on an uncharted island.

The prison is under scrutiny for a violation of human rights. Warden Acosta has been stealing funds from prison labor for his personal gain. From the beginning, John has already found himself in hot water with lead prison guard Vargas as well as inmate Alvarez, who seeks revenge as he is the sworn blood-brother of Chavez. It becomes more complicated when redneck leader Sacker is refuted when he asks John to join the white prisoners. While John eventually finds an ally in the veteran Uncle Coronado, he soon learns of Acosta’s plot and when the organization Human Rights International plan a visit to the prison to question inmates, everything will come to a head, forcing Merill to do what he has done since entering prison, survive using his fighting skills.

It should come to no surprise that when it comes to the cinema of Roger Corman, it can be about recycling films and adding a bit of a twist to that. In 1991, Corman produced the in-name sequel Bloodfist III, starring kickboxer turned actor Don “The Dragon” Wilson as a prisoner caught in a race war. For this film, which brings the race war in play, the twist comes with how we see Jerry Trimble’s John Merill arrival and his fight that lands him in the prison. Whereas the original Shaft, Richard Roundtree became Wilson’s ally in the former, we are treated to the original Mr. Sulu himself, George Takei as Uncle Coronado, whom everyone but our villains clearly respect.

While Bloodfist III had two main villains, this film has double the amount of lead villains. First, there is the warden himself, played by veteran Filipino actor Vic Diaz, whose looks could have landed him as a classic James Bond villain of sorts and became a mainstay of Roger Corman and Cirio H. Santiago’s films in the Philippines. Then comes lead guard Vargas, played by another Filipino actor, Ronald Dantes, who is also a martial artist skilled in stickfighting. He can be said to be a Filipino version of famed kung fu actor Chan Sing with his looks and build. Then comes our two inmate villain with redneck Sacker played by veteran Ted Markland and Alvarez, played by Romy Diaz, whose dubbing sometimes sounds pretty horrendous.

Ronald Asinas, Santiago’s favorite stunt coordinator, not only co-stars as Ocho, but worked on the action here. Trimble looks great when he fights as he shows why he is one of the best kickers not only in the sport of kickboxing, but on film as well. Showing the skills he learned in the ring and transitioning them smoothly, he gets to up against the likes of Kris Aguilar in the opener and finds himself virtually in one-on-many fights over and over again to a very annoying guitar riff that plays over and over during the action scenes. Parts of the ending totally rip-off the climactic scene from Bloodfist III but adds that nice little twist in the end.

Live by the Fist is a typical but enjoyable 90’s martial arts action film with Jerry Trimble in top form with great support by George Takei. The fight scenes are enjoyable as well, despite the annoying electric guitar riff playing over and over again.