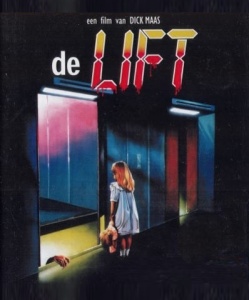 “Take the stairs. Take the stairs. For God’s sake, take the stairs.” This was the tagline to the 1983 Dutch horror film THE LIFT. This was the film that put director Dick Maas on the international horror circuit only to have it solidify five years later with the more superior Amsterdamned. Nearly two decades later, Maas would remake the film and add some tweaks here and there when he made Down, known in the United States as The Shaft. This review is more of a comparison between the two films.

In The Lift, a high rise building in the Netherlands is struck by lightning. When a group of drunken partygoers enter the elevator to go home, the elevator gets shut down en route and the air is turned off. All the passengers faint horribly and are hospitalized. Deta Liften’s Felix Adelaar is sent to check on the elevators the next day and finds nothing wrong.

Later that day, a blind man and his dog fall down the shaft when the doors open. That night, two security guards think someone is still in the buildings and when the doors open, one of the guards sees the dead dog in the bottom of the shaft. The doors close on the guard’s head and the elevator goes down, taking the guard with him, ultimately decapitating him.

When Mieke de Beer, a local reporter, investigates the recent deaths in the high rise, she tries to get a story from Felix, who refuses. However, as more mishaps begin to occur, Felix goes to an asylum where a former co-worker is staying because of something that happened with the elevators five years ago. When he is no help, Mieke offers to help and together, they learn from a friend of Mieke’s that “bio-chips” had been created. Convinced that they may ultimately be the cause of the chaos, Felix intends to go find the source and destroy the elevators once and for all.

In The Shaft, New York City’s Millennium building is one of the biggest buildings in the city. It has over 100 floors and 73 elevators. When a group of pregnant women enter the building for child birthing class, the elevators mysteriously begin to shut down en route and the air is turned off. Two of the women give birth and the rest are hospitalized.

The elevator building company, Meteor, sends its two best technicians, Mark and Jeffrey, to investigate. When reporter Jennifer Evans arrives, she has been known not to be on the good side of the investigating detective. Mark and Jeffrey find nothing wrong with the elevators and are on their way.

A blind man, who has been tricked by his hair stylist, and his seeing-eye dog, fall down an empty elevator shaft after the doors open. When two security guards arrive when they see activity within the building after hours, one of the guards looks in the elevator shaft and sees the dead dog. Then, the scene made famous by the original is shown here. The doors close in on the guard’s head and the elevator lowers itself onto the guard, causing a “decapitation”.

Mark inadvertently gets himself in hot water with his boss Mitchell when he tells Jennifer that “nine out of ten people survive elevators”. Meanwhile, a rollerblader in the garage parking lot gets sucked in by the elevator, sent to the top floor, and is hurled off the top of the building. The cause of death is ruled a suicide, but Jennifer discovers that it is not all it seems and shows Mark the proof when the timing shows that a suicide is impossible.

When Mark tries to convince Jeffrey of the elevator’s mishaps, Jeffrey wants no part of it and the next day, is found dead by the Millennium Building’s supervisor Milligan when he is strangled in the shaft. Jennifer and Mark soon discover that the elevators have been built using a new brand of “bio-chip” created by a former disgraced scientist, Steinberg. It is up to Mark and Jennifer to find the “bio-chips” in the shaft and destroy them once and for all before Steinmann gets to them.

Having seen both The Lift and The Shaft, the central theme of the story is definitely the same: killer elevators. However, there does pose a major difference in terms of the main protagonist of the story. In The Lift, Huub Stapel’s Felix Adelaar was a technician who was going through a troubled marriage and in The Shaft, Mark is a man who had been dating Jeffrey’s sister only to get himself in hot water and she eventually leaves him for another man. In addition, Mark is a former Special Forces operative whose life had gotten nowhere and turned to Jeffrey, who served with him, to get him the job for the elevator company. As the troubled Mark, James Marshall brings a performance that may possibly make Huub Stapel proud as they are seen as two guys who not only have to deal with the “elevator” crisis but also their personal lives at the same time.

However, most of the supporting characters are pretty much the same between the two films. There is the snooping reporter who is trying to get a story out of the whole thing at first. However, in both cases, The Lift’s Mieke and The Shaft’s Jennifer both prove to be the solutions to the problem as they learn what the cause of all the mishaps is. There’s the blind man and dog that both fall down the shaft and the famous “decapitation” sequence, whereas the original was done with a mannequin head and the later version done digitally.

There’s also the dopey detective who doesn’t have a clue as to what is going on, the boss of the technicians who may or may not have a dark secret, and then there’s the scientist whose “creation” is responsible for the chaos that emerges in the entire film. The only difference between the Frankensteins here is that the scientist in The Lift realizes he had made a mistake and was willing to do what it takes to stop them while The Shaft’s scientist was a cold hearted scumbag who didn’t care if anyone was dead by the film’s end.

The other big difference between the two films is that in the later version, which was shot and in the can just before the September 11 attacks, had a climatic that involved the U.S. Army into thinking that there may have been terrorists involved in the deaths of the people in the building. In one very disturbing sequence, when Mark prepares to unleash his wrath on the control box where the biochips are held, the elevator is set on fire and while it misses Mark, an Army trooper falls halfway down the shaft and when the elevator arrives, it cuts the trooper in half like a hot knife cutting through butter.

While both films do have their moments, it can be said that The Lift is clearly the better of the two, despite its lesser production budget. However, Dick Maas is clearly one of those directors who can clearly remake his own films and make it work, while not always better, but still…it works.