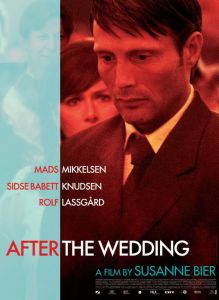 What was supposed to be a momentous occasion for a family soon becomes a life-changing journey for a man who comes into the family’s life in this film from world-renowned Danish auteur Susanna Bier.

Danish-born Jacob Petersen is the manager of a run-down orphanage in Mumbai, India. He has grown close to the kids there, especially acting as a father figure of sorts to eight-year old Pramod. When the orphanage is on the brink of bankruptcy, a major corporation in Denmark, run by CEO Jørgen Lennart Hannson, offers to make a donation to help the orphanage upon the condition that Jacob goes there to collect the funds. While Pramod is upset, Jacob makes a promise to return for the boy’s birthday in eight days.

When Jørgen meets Jacob, the CEO invites the man to his daughter Anna’s wedding to a young man named Christian. At the wedding, Jacob is in for a shock when he sees Helene, who was his long lost love. Helene is Jørgen’s wife. Jacob’s world is turned upside down from secrets that may change his life forever.

This Danish drama is very intriguing and very enjoyable thanks in part to the screenplay by Anders Thomas Jensen, who came up with the story alongside auteur Bier. The film couldn’t be more appropriately titled as it involves some secrets but not done in a way that is dark, but still has a bit of shock value. It is truly done in the dramatic sense that only can be done in an art house-type of manner.

The film is driven by Mads Mikkelsen, perhaps the most popular Danish actor today thanks in part to his turn for three seasons as Hannibal Lecter in the prequel series Hannibal. Mikkelsen is great to watch as our protagonist Jacob, who goes from being an orphanage manager to someone whose life takes a turn for either the better or worst depending on how the viewer sees the film. All because someone from his past unexpectedly is back in his life when he learns that the wife of the man who is willing to donate money to him is in fact an old flame. Interestingly enough, what one would expect in this case, goes more alongside the opposite direction for the most part.

Rolf Lassgård is also great to watch as Jørgen, who one can look as a mastermind with ulterior motives when it comes to Jacob. Does he really want to help him? Does he know that his wife was once Jacob’s girlfriend? As the film progresses, once Jørgen’s intentions are clear, it goes to show that even with power, a person with power is actually human. As for Sidse Babett Knudsen as the woman who Jacob once loved and now shows love for Jørgen. She doesn’t really need dialogue to show her feelings as her expressions are good enough to show her feelings in this entire situation. The other breakout star is young Stine Fischer Christensen as Anna, the bridge of the wedding whose life, much like Jacob’s, takes some twists and turns that change the course of her life as well.

Definitely character-driven as well as a very good storyline with some intricate twisting that changes the course of the characters’ lives, After the Wedding is a very good foreign drama. It is clear why this was Denmark’s first nominated film for Best Foreign Film at the Oscars in 2007. While it ultimately didn’t win, the performances by the cast are great enough to check this film out.