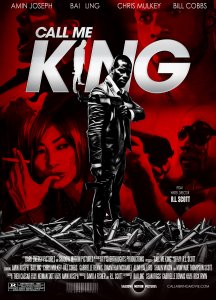 The latest film from indie action filmmaker R.L. Scott is a tale of power and the consequences it can have in the world of organized crime.

Angelo Costa is the most respected gangster in the city. In fact, when he even senses anyone trying to get him out of a deal, he sends in a band of four enforcers. The Strap Set is led by Rhyis, a tough as nail man who twenty years ago, fled Haiti along with his younger brother Khalil. Joined by the eye-patch wearing Grimm and playboy Zho, the Strap Set handles business using both guns and their impeccable fighting skills. Rhyis has earned the respect of Angelo, who trusts the Haitian man more than his spoiled brat of a son, Nick.

However, a struggle in power is about to go down when Angelo reveals that he has cancer and will eventually be forced to step down. In this world, normally the boss would pass his power onto his next of kin. However, when Angelo informs Nick that Rhyis will be the new boss, Nick sets up a plan with other gang leaders to exterminate Rhyis. However, that will become the least of Rhyis’ problems when his father Knight, the former Minister of Defense in Haiti, has returned with some intentions of his own.

R.L. Scott had burst onto the screens with his awesome fight film series Champion Road. His latest film delves into the world of organized crime and the price to pay when attempting to gain power. Scott’s script is well written with a few added twists, from double-crossing to scorned women, that just enhances the dramatic portion of the film. Scott also delivers with the action portion, serving as the film’s fight choreographer. Instead of using flashy kicking and tricking, Scott deals with a more close quarter, fast and furious style of boxing and hand movements. However, one fight that stands out with its use of kicking comes in stuntman/martial arts ace Gray Michael Sallies taking on Rhyis’ brother in a short and sweet fight scene. The only flaw is that some of the visual effects looked like they could use improvement when it came to shootings, but it’s ultimately forgivable.

Lead actor Amin Joseph oozes with coldness as Rhyis, whose intentions are first to gain enough money to go back to his homeland of Haiti only to learn a major opportunity arises. He decides to roll with the new plan, but soon learns that his new found opportunity does in fact, have a serious price. Joseph plays Rhyis as someone who has a mission in life and will do what it takes to complete that mission. What helps is that Joseph works well with Hollywood veteran Chris Mulkey as mob boss Angelo, who respects the Haitian enforcer more than he respects his own son, who from his introductory scene, is just a brat who thinks life comes on a silver platter only to learn that it doesn’t go down like that.

A definitive twist in the film involves the story of Leena, played by Gabrielle Dennis. Her boyfriend, Strap Set member Zho, is known for his playboy ways and when he admits he no longer has interest in her, she leaves him. This becomes the advantage of femme fatale Simone, played by Scott’s wife Monyque Thompson Scott, who oozes with almost as sheer coldness as Rhyis. Simone, with the help of her bodyguard, trains Leena to become a sniper assassin. However, it isn’t until the end that the revelation as to why is revealed.

Normally, hearing the name Bai Ling would leave a bad taste in my mouth due to some roles she had taken in recent action films. However, she truly has redeemed herself with her role in Li Soo, a Korean-born gunrunner who respects Strap Set member Grimm so much she entrusts him to help her with her drug addict sister. She really shows some true emotion in this film and she should do more roles similar to this one. Bill Cobbs is also a delight to watch as Malachi, another former Haitian immigrant who serves as the mentor of Rhyis and his brother. Robert Miano and Del Zamora make the most of their screen time as fellow mob bosses who learn they cross Angelo, they are dealing with the wrong person. As for Shaun Mixon’s Knight, the father of Rhyis and Khalil, all he seems to want is for his sons to join him in their ranks to make up for lost time.

Call Me King is definitely a very good indie action film from director R.L. Scott. The story has some nice twists moved in and the action is pumped up here. If you like action films and independent films, this is a must see for your list.