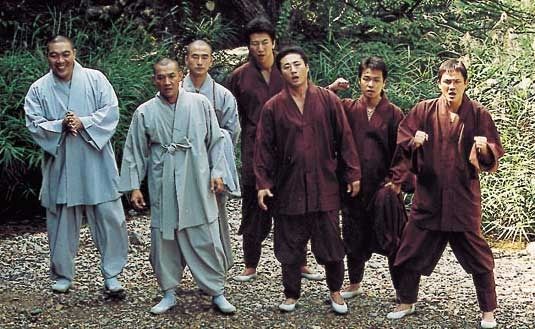 It’s a rivalry never seen before on screen as a group of gangsters take on a band of monks in this pretty funny Korean comedy that features some pretty good action as well.

When five members of a gang narrowly escape a fight against the rival Chunno Gang, they learn the Big Boss in hiding. Sub-boss Jae-Gyu and his boys Big Bear, Big Mouth, Knifie, and Rookie find themselves in a major pickle. Thinking about where they can lay low, they discover the last place anyone would find them: a monastery. While they eventually get permission from the Master, the group soon learns that the resident monks want nothing to do with them.

The monks decide to challenge the gangsters to a series of games. If the gangsters lose, they must leave the monastery immediately. When both are tied two to two, the Master offers one last challenge, in which the gangsters miraculously win, allowing them to stay. Meanwhile, while the monks and gangsters are still at odds, Jae-Gyu begins to suspect someone within the gang and not his men betrayed them which caused the big fight to begin with. Eventually, the gangsters and the monks begin to respect each other but what will happen when the traitor returns with the intent of wiping out their former comrades?

There have been many rivalries seen on screen. Gangs against gangs. Countries at war. Martial art against martial art. However, gangsters against monks? That’s something fresh and inviting and yes, that’s exactly what screenwriter Park Guy-Jae came up with in this really funny Korean comedy. However, the challenges these two rivals must endure are more a series of games instead of fights, a concept reminiscent of the famous Bill and Ted against the Grim Reaper in Bill and Ted’s Bogus Journey (1991).

The cast is great in this one. The gangsters are all of different personalities. Park Shin-Yang’s Jae-Gyu is the leader of the group. Park Sang-Myun in the big softie of the group. Kang Sung-Jin is the tough guy with a heart of gold, especially when he feels connected to a female monk on the premises. Kim Soo-Roh is the loudmouth of the bunch and the runt of the group, Hong Kyeong-In, feels a connection to a young boy monk as they are both the youngest amongst their groups.

Jung Jin-Young is the resident monk who is constantly at odds with Jae-Gyu and his men. He’s sort of the ringleader of the resident monks with Lee Moon-Sik’s monk Dae-Bong revealing that before joining the monastery, he was actually a Marine. Ryu Seung-Soo’s Myung-Chun starts out on a vow of silence but during a challenge, can’t hold back anymore and once he speaks, he speaks, and speaks, and speaks. Lee Won-Jong’s Hyeon-Gak is the burly member of the group and one would assume he connects to Big Bear, but that actually goes to Dae-Bong as Big Bear actually was a Marine as well before joining the gang.

The film shows some hilarious comic bits such as the challenge pitting the two ex-Marines against each other and in one hilarious scene involving Big Mouth when the monks decide to try their hand at making the gangsters leave willingly. There is also some nice action scenes in the third act, where we see Jung Jin-Young’s Jeong-Myeong using martial arts first against Jae-Gyu then in the finale when the traitor of the group intends to get rid of his former men only to be saved by the monks.

A sequel, Showdown in Seoul, was released in 2004 with Jung Jin-Young returning as the monk but with Shin Hyun-Joon as a new gangster who goes at odds with the monk.

Hi! Dharma! brings something fresh to the mix with the rivalry between gangsters and monks. Of course this is done in a funny manner and shows that even two opposite sides of the spectrum can in fact join forces and respect each other, even if it doesn’t start that way at first.