The Raid (not the awesome Indonesian martial arts action film) was released in 1991 and directed by the legendary Tsui Hark. The film stars Jacky Cheung, Tony Leung Ka-Fai, and in one of his final film performances, legendary Hong Kong comic actor Dean Shek.

“The time is 1930s. China is in a state of turmoil and flurry. The dethroned Emperor Pu-Yi establishes the Puppet State of Manchukuo in Manchuria and is in cooperation with the Japanese in the test for a poisonous gas. The revolutionary army headed by Lieutenant Mong is designated to crush this vicious plot. During his mission, he comes across witty and valiant veteran Uncle Choy and his friends, who volunteer to help. Mong keeps a view that Uncle Choy is too old to join them. How can Uncle Choy prove himself? Can Mong and Uncle Choy succeed in their mission?” 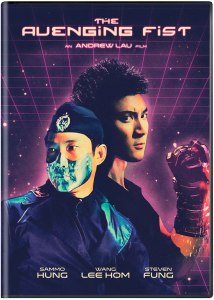 The Avenging Fist, released in 2001, was meant to have been an adaptation of the video game Tekken. However, when it was revealed that producer Wong Jing did not get Namco’s permission, he changed the names of the characters but some of the characteristics are still there. The film was co-directed by Andrew Lau (Infernal Affairs) and Corey Yuen (The Transporter) and stars Leehom Wang, Sammo Hung, Yuen Biao, Stephen Fung, Kristy Yeung, and Roy Cheung.

“Scientists’ experiments on the Power Glove are on the verge of success. Power glove is designed to activate the hidden potential in human’s brain to empower the force of human beings. Special agent Dark, Thunder and War 21 are the only survivors in that experiment. Ambitious War 21 gets evil. He captures Thunder with a power glove and disappears… He has become Dark’s fugitive for 20 years. Two decades later, War 21 comes back with brainwashed Thunder and his underground troop aiming to rule the world. Dark is failed to eliminate them but he realizes Thunder has a son who also has the DNA, which enables him to use the power glove to challenge War 21, eventually…”

Born to Defense (1988) is the only film Jet Li has directed and revolves around a former World War II fighter who takes on a band of abusive Marines after he returns home and finds they are taking way too much advantage of their surroundings. The film co-stars Bloodsport‘s Paulo Tocha and the late Kurt Roland Pettersson as the villains of the film.

The Defender, originally called The Bodyguard from Beijing (1994) is a HK remake of the film The Bodyguard minus the singing music. It features a nicely shot finale between Li and Collin Chou (The Forbidden Kingdom).

The Legend of Fong Sai Yuk (1993) is the first of a two-film saga where Li plays another folk hero, Fong Sai Yuk, who studied martial arts from his mother and gets himself involved in a conspiracy plot. The film co-stars Li’s replacement in the Once Upon a Time in China series, Vincent Zhao, as the main villain.

Once Upon a Time in China and America (1996) was Li’s official return to the series, returning as legendary martial arts icon Wong Fei-Hung. While in America visiting an old friend, he suffers from amnesia and is taken in by a friendly Native American tribe. Meanwhile, bandits and slave drivers are set to cause some trouble. Directed by Sammo Hung, the film co-stars Rosamund Kwan, Xiong Xin-Xin, and Jeff Wolfe.

From Beijing with Love (1994) is Stephen Chow’s take on the famous James Bond story. For those who are familiar with Chow’s mo lei tau style, expect his usual goofy antics in this Lee Lik-Chi directed film that co-stars Anita Yuen and Law Kar-Ying as the “Q” of the film.